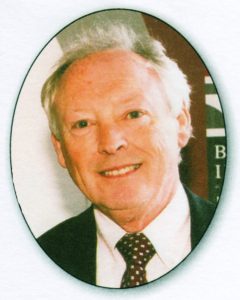 William (also known as Liam) Devlin, who died on 12 December, a few months after his 73rd birthday, was a teacher with a special interest in life-long learning who carried on that interest after he retired. He developed a special interest in working with European institutions to develop educational and social links between people in different countries.

Born in Belfast, a city that he loved and in which he spent most of his working life, he attended St Mary’s Grammar school. He held a number of jobs before joining the Northern Ireland Civil Service. This was only a transitory period as his life ambition was in the education sector. So, after five years and intensive study at night school, he successfully applied to Trinity College Dublin where he graduated in English and Philosophy. He taught in St Malachy’s College, Belfast and Lisburn Tec before taking up a post in Belfast Technical College where he remained until his retirement.

As a graduate of TCD, William was always active among the alumni and joined the TCD Northern Ireland Association (TCDANI), acting as Secretary for almost 20 years. In 2013 he was elected President of the Association and served until his death. In that role, and despite developing poor health, he provided positive leadership and initiated a number of events and policies that will outlast him. One of his first was to set up a biannual forum for the heads of alumni groups in Ireland to develop ideas on alumni enrolment, mutual help schemes, joint events, shared ideas, helping young graduates with issues of employment, placements and networking and feed-in to College policies.

For many years there had been deep concern at the number of students from Northern Ireland who could not get admittance to Trinity because of their entrance requirements, which many perceived as unfair. The new initiative announced this year will help to redress that imbalance. William had been instrumental in helping to address and drive forward the issue.

The University of the Third Age (U3A) movement is an organisation that provides life-enhancing and life-changing opportunities for retired and semi-retired people to come together and learn together, not for qualifications, but for its own reward. Members share their skills and life experiences: the learners teach and the teachers learn, and there is no distinction between them. Downe U3A, covering the Downpatrick and Lecale areas of County Down, was inaugurated following a meeting of interested people convened by William in Down County Museum in 24 January 2007. That group has now over 200 active members and continues to grow. William was its Chairman for many years.

When, in 2007, the Federation for Ulster Local Studies was in danger of closing down following the withdrawal of official funding, William was one of a small number of activists who saved it from collapse and reconfigured it to operate on a purely voluntary basis. He acted as Company Secretary until 2013 when his illness prevented him from continuing.

His focus was much wider than the provincial and he became heavily involved in developing the Federation’s links with the Federation of Local History Societies south of the border, and made many friends throughout the whole island.

For many years he had also been developing links with people and organisations in Europe and participated in a number of programmes designed to enhance links and friendships between people.

In 2009, for the Downe U3A, William initiated and co-ordinated a European project called Our Continent – Our Culture. This was a partnership project of participating educational bodies in Europe involving Language Learning, Identity, Active Citizenship, European Cohesion and Understanding, together with intergenerational linking and communications technology. The participating institutions were based in Northern Ireland, Spain, Portugal, Italy, Finland and Germany. The project involved the establishment of personal relationships, transnational visits involving cultural and social activities and rigorous evaluation.

For the Federation he initiated, planned, organised, arranged finance for, and ran, a two-year project (2011 to 2013) under the European Commission’s Gruntvig Senior Volunteering Project. Aiming to respond to a key educational challenge faced in Europe – namely an ageing population, the project supports volunteering projects between organisations located in different countries, enabling senior volunteers to work for an organisation in another European country. The bodies involved were the Federation and the Archives of the City of Leuven. In addition to preparatory activities and regular communications between the individuals involved, each group spent three weeks in the other’s country, participating in a number of hands-on activities, as well as enjoying a number of visits and lectures on a wide range of historical perspectives.

The Federation extends its deepest sympathy to his wife Monica, his children, Peter and Catherine, and his sister, Anne and her family.