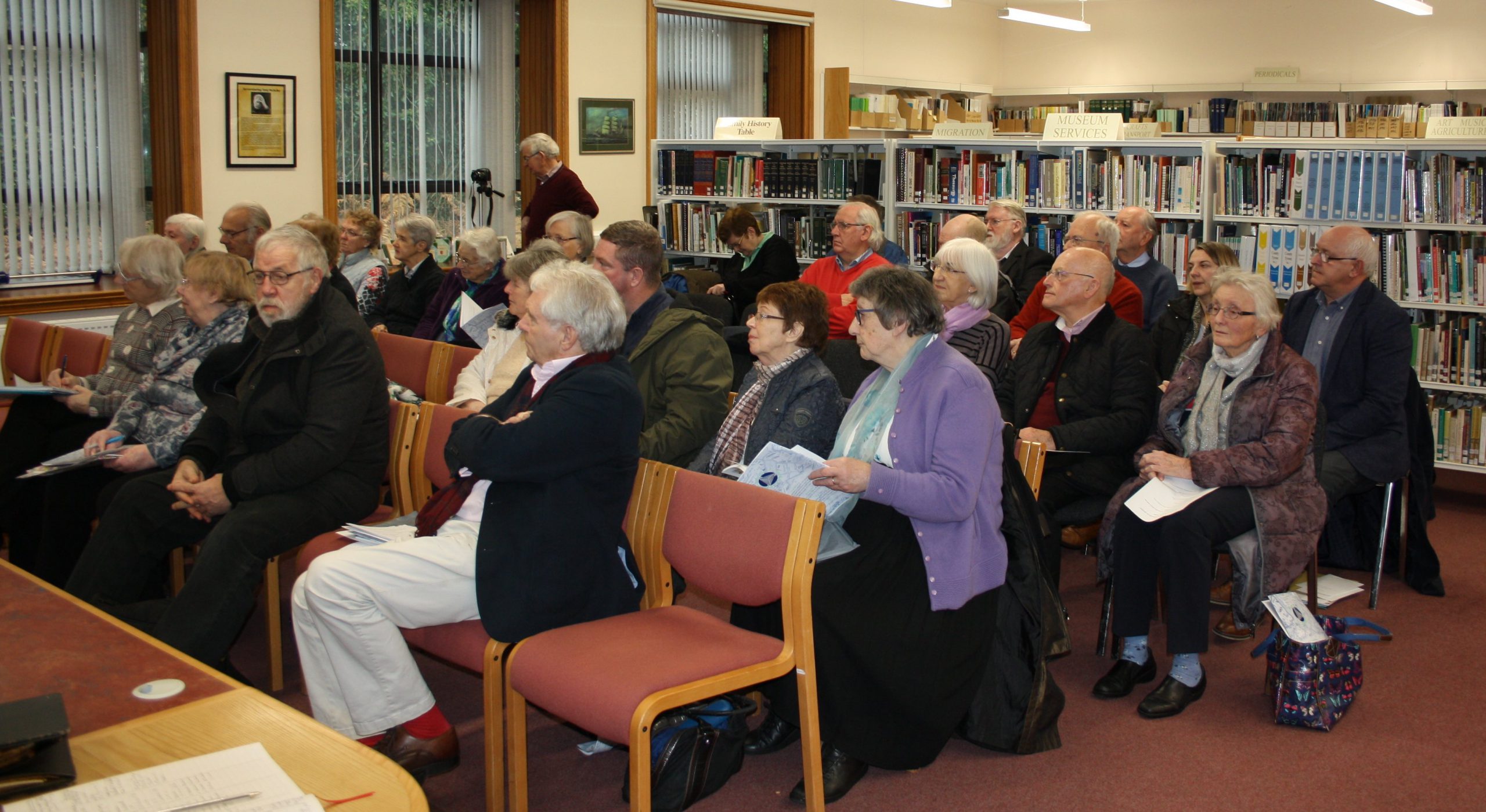 Welcoming the Federation to the Centre, the Director, Catherine McCullough explained that the Centre was a project of the Scotch Irish Trust of Ulster, a member of the Library Service and situated on a National Museums site, the Ulster American Folk Park. She introduced Dr Patrick Fitzgerald, Head of Research and Development, who would be speaking later, and wished the Federation a successful meeting.

Chairman Johnny Dooher welcomed everyone to the AGM. Opening the Meeting he asked for approval for the Minutes of the last AGM, in Maghera. These were approved.

Secretary, Pat Devlin, proposing adoption of the Secretary’s Report, circulated to members with the AGM papers, provided an update. The new website should be available in January next. He reported that the Newcastle Field Club in existence for 60 years, had decided to wind-up operations as no one could be found to take on the key tasks. He had written to the club, acknowledging their long-term membership and wishing the individual members well in the future. He also introduced a new member, Termonmaguirc Historical Society, formed earlier this year. He also congratulated the Larne & District Folklore Society, on the 50th Anniversary of their formation. He congratulated the Ulster Local History Trust for their excellent and well-attended Seminar in Armagh Beyond the Pale on 19th October, in which Johnny Dooher had given a talk on the work of the Boundary Commission. He went on the pay tribute to John Hulme, a member of the Executive Committee since 2007, who was not standing for election this year, for his initiative in researching and refreshing the Speakers and Tour Guides Register that was such an invaluable resource for Societies, and for his continuing promotion and support for the Hidden Gems and Forgotten People Project.

The minutes of the 2018 AGM, were approved

Treasurer, Bridie Bradley proposed adoption of the 2018-2019 Independent Examiners Report and Financial Statement. She took the delegates through the detailed analyses provided which was accepted.

Chairman Johnny Dooher thanked the Secretary and Treasurer for the detailed and well-presented reports and thanked all the members of the Executive committee for their work. He commented on the disconnect between the Executive Committee and the member societies that needed to be corrected. He briefly reviewed some of the Committee’s work including the March Seminar in Armagh and the highly successful joint FULS/FLHS trip to Armagh in September. The development of the new website had taken up a considerable time of the three members of the project team, Pat Devlin, Patrick Bonar and Joe McCoy and he thanked them for their effort.

For the future the Executive Committee needed to reach out to the members to involve them more directly in planning the way forward. How do the members see the Executive Committee? Are they making the most of the relationship? The Federation is a way of coming together for a common purpose, and we ought to focus on working together to identify more clearly what that purpose is and plan how to advance it.

Commenting on EC members who had ‘soldiered on’ for years and who were now withdrawing he mentioned John Hulme’s long service and also Pat Devlin, the long-serving administrator for the Federation, who was not seeking re-election. He himself had joined the Committee in 1992 and had seen the slow decline in participation over the years. These issues pointed to the need to a new approach to administration in which some Federation resources might be used. He thanked Catherine McCullough and the staff on the Centre for hosting the Meeting and helping in its running.

Election of Officers and Committee

The elections were conducted by Evelyn Cardwell, Donaghmore Historical Society

The Officers and Executive, elected at the meeting were

The positions of Vice-Chairman and Secretary remained vacant

The appointment of Roisin Shanks was agreed.

Welcome to Chair of the Federation of Local History Societies

The Chairman invited Mairead Byrne, Treasurer of the Federation of Local History Societies, to address the meeting.

Mairead said how pleased she was to have been invited to the AGM. She brought apologies from Chairman Padraig Laffan and Larry Breen who were both involved in another event. She talked about the Joint Visit to Armagh in September, when fifty of their people came up for a couple of days, about how helpful and friendly everyone they met had been, and about the wonderful Lord Mayor’s Reception in the Palace. She mentioned the proposed Joint Meeting with the Federation on 2 December when the next Joint Trip, this time to the South would be planned. She suggested that it would be best if. like Armagh, it could cover two days rather than one. She was supportive of the Hidden Gems and Forgotten People Project and suggested that there might be merit in producing a book based on it.

There were several contributions from Societies, as follows –

Newly elected Chairman, Josie Herbison thanked the meeting for electing her to the office. She thanked Johnny Dooher for his Chairmanship over the last two years, and also Pat Devlin and John Hulme who had not sought re-election. She hoped that in the future ways could be found for the Executive Committee and individual Societies to work more fruitfully together to develop local studies. She gave advance notice of a Seminar in Seamus Heaney’s Homeplace in the Spring.

Launch of Due North

President Dr Brian Turner, launching the new edition of Due North, thanked the Editor, Johnny Dooher, for keeping the publication going. It provided a space not only for for local historians without their own journal, but also for articles on wider subjects beyond the local. He had been impressed by the contributions from local societies here today and thought it a pity that more societies were not here to learn from these impressive local initiatives. The Federation provided an opportunity not only to look inwards – how we connect locally, but also to look outward – how we connect with other places.

Dr Patrick Fitzgerald, Head of Research and Development at the Centre, spoke at length about the origins and development of the Centre. The Folk Park itself was formed in 1976 as part of Northern Ireland’s contribution to the American bicentennial. The Library was added in 1992, opened by Sarah Ferguson. In 1996 began working with QUB and in 1998 the Centre was formed with Dr Brian Lambkin as its first Director. In 2008 he and Brian produced the book Migration in Irish History 1507 to 2007. In 2011 the name Mellon was added, and in the same year, the digital emigration database – DIPPAM (Documenting Ireland, Parliament, People and Migration) was launched.

and the outcomes of migration

The Centre had a number of Partnerships: Scots-Irish Trust of Ulster, Libraries NI, PRONI, QUB, University of Ulster, and NMNI. They also work closely with the Armagh and Omagh District Councils.

The Library holds a wide-ranging collection on migration, focussing mainly on America. There are Griffith Valuation maps as well as periodicals and public access terminals. There is an extensive biography section with over 1500 volumes.

The Irish Emigration Database (IED)began in the 1980s and currently holds over 33,000 transcribed, word-searchable digital volumes. Many visitors are ‘Roots Tourists’ from all over the world. Available in the Library are publicised shipping lists, books on ‘How to research ancestors’, lists of names, filing cabinets with additional materials. In particular the visitor benefits from a friendly, helpful staff who are always ready to assist in any way they can. Patrick talked about the Centre’s other activities including taking Interns from the QUB Department of Public History, hosting seven or eight USA University Groups every year, and many academic links across the UK, Ireland and beyond. Also, works with the Armagh and Omagh District Councils on Community Engagement work. In conclusion he wished the Federation well in its work.

The Chairman thanked all who had come along today and participated in the discussions.

Attendees then made their way to lunch before going on a guided-tour of the Folk Park.