The Exhibition was the eighth staged since September 2016. Thanks Shirin Murphy of the Museum for her help in making it happen. 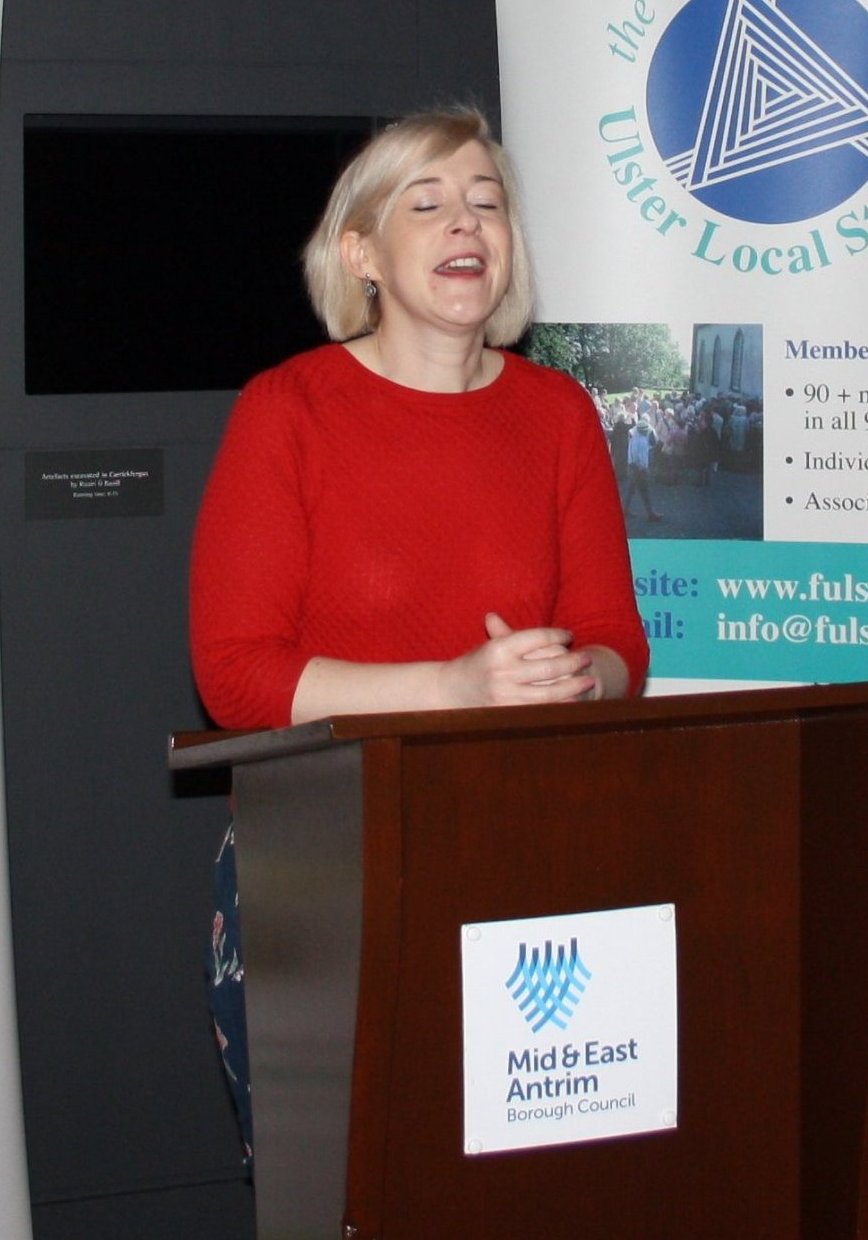 Shirin Murphy, Carrickfergus Museum, welcomed the speakers and guests to the Exhibition. The Museum was happy to host it and it would remain until 8 December. She called on Alderman McKeen to launch the event 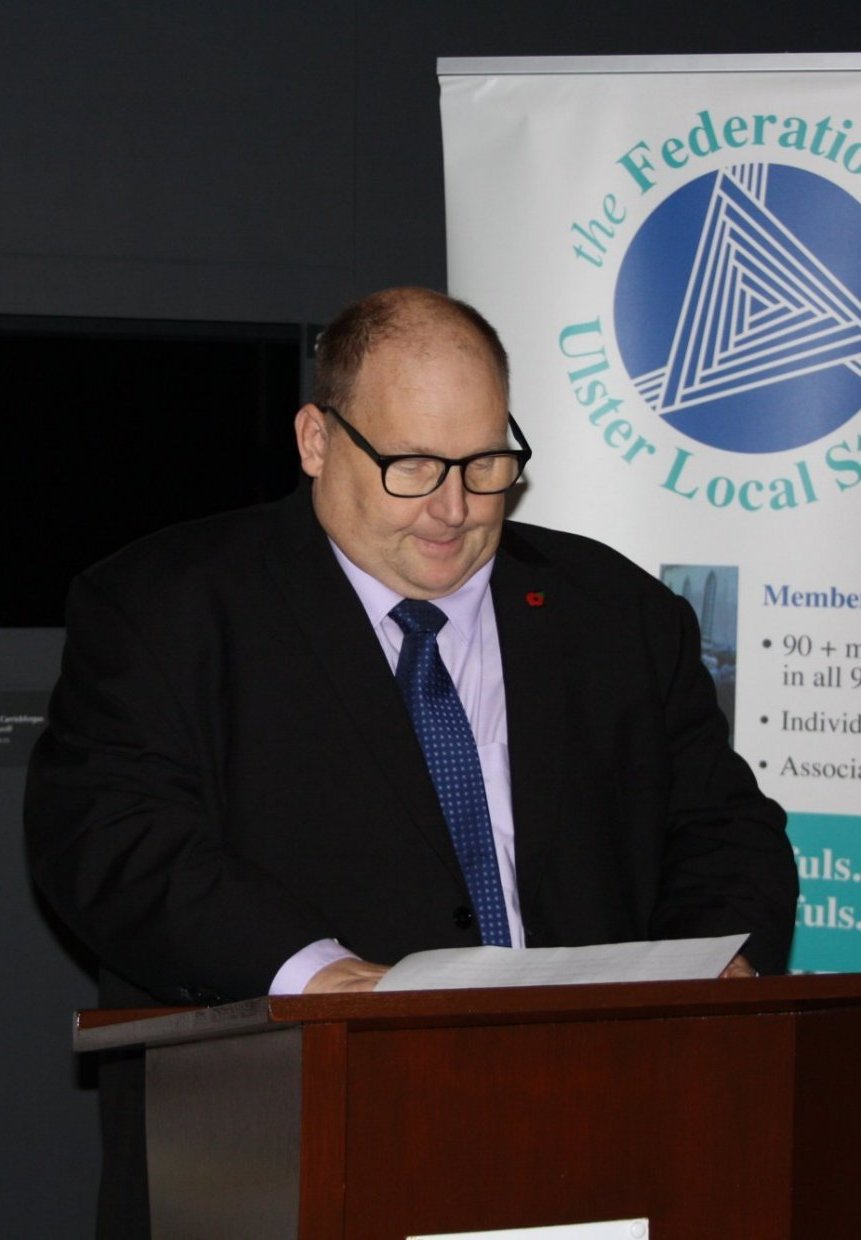 Alderman Gregg McKeen, Mid & East Antrim Borough Council, was pleased to launch the Exhibition, a joint effort of the Federation for Ulster Local Studies and the Federation of Local History Societies in the Republic of Ireland. He congratulated all those involved and referred to the comprehensive website that celebrated the lesser known places and the largely forgotten people who had contributed so much to their communities in the past. From its launch in Dublin in October 2015 it had been staged in many places and now, in cooperation with the Carrickfergus and District Historical Society, it was now here in Carrickfergus Museum. It showcased locations and people in the local area as well as others from further afield. He wished the Federations well in their endeavours.

Johnny Dooher, Chair of the Federation for Ulster Local Studies, said that the exhibition programme had been going now for three years. The main focus of the Federations has been to encourage local societies to identify such people and places in their own localities. The aim was to bring people together looking at local stories and memories of particular people who deserved to be better remembered in a permanent form. In relation to places, much had already been destroyed and this project might help to identify those that deserved to be recorded and preserved. It was an on-going project with the aim of generating more and more participation. A lot of work was being done by many people in many places and he wished to mention the work done by John Hulme in personally promoting the project and searching out people and places for the website, sometimes at some physical risk to himself, climbing over walls and gates. Johnny thanked those who had contributed. This exhibition may be the end of the current phase of the project and the Federations may need to take stock of how best to carry the project forward. 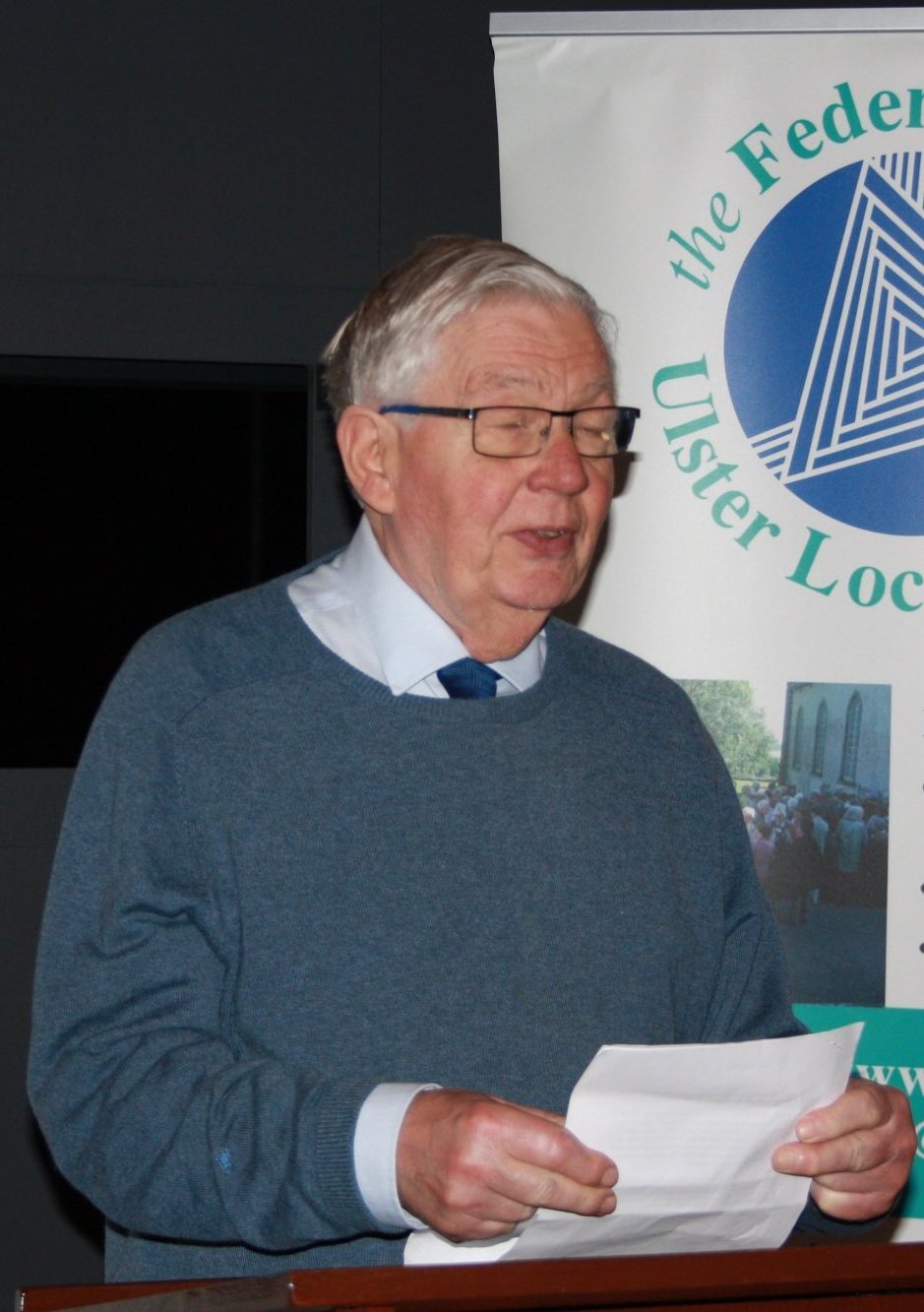 John Hulme, Carrickfergus & District Historical Society, said that the first time he heard of the project, at a Joint Meeting with the Federation of Local History Societies, he had been smitten and it had since become a great privilege and one of the joys of his life to be involved in it. In Carrickfergus, as elsewhere, there 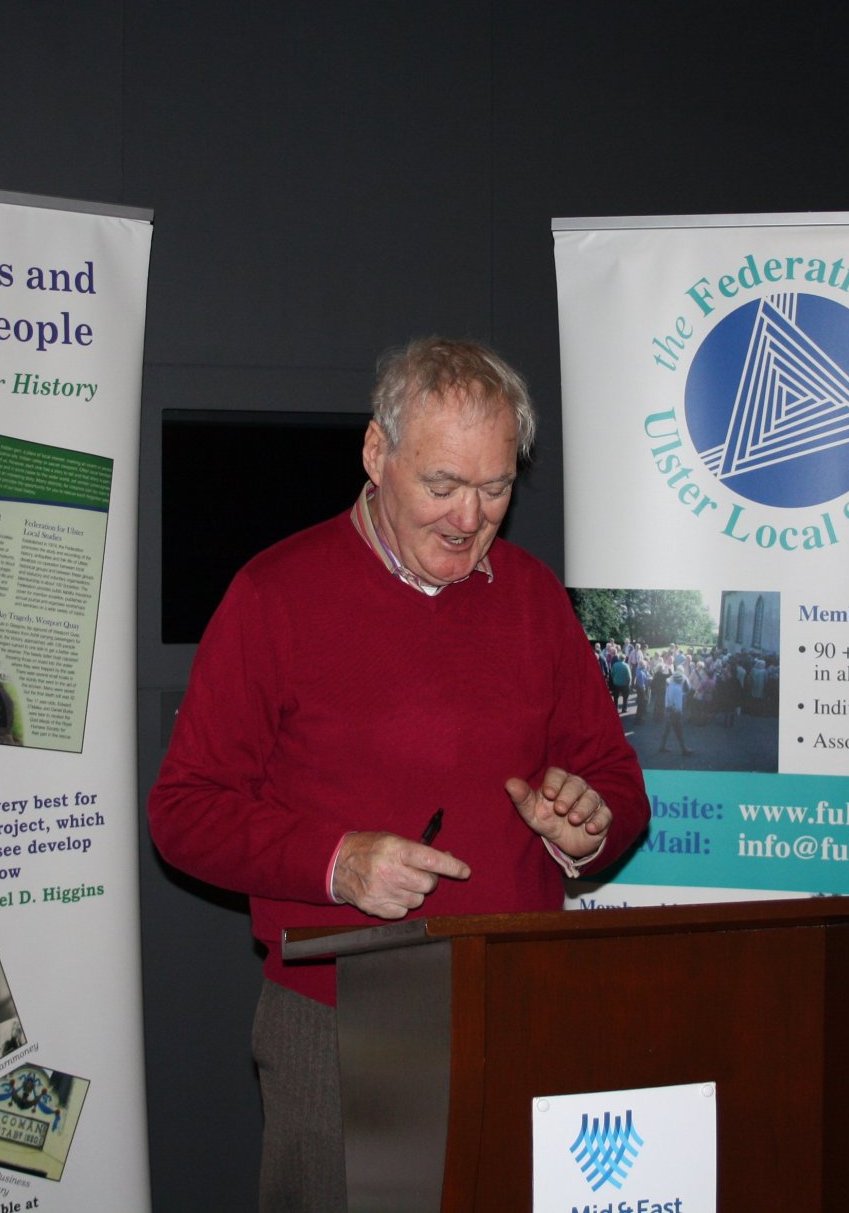 were amazing numbers of ruined buildings and structures and forgotten people. He would mention only a few of them. 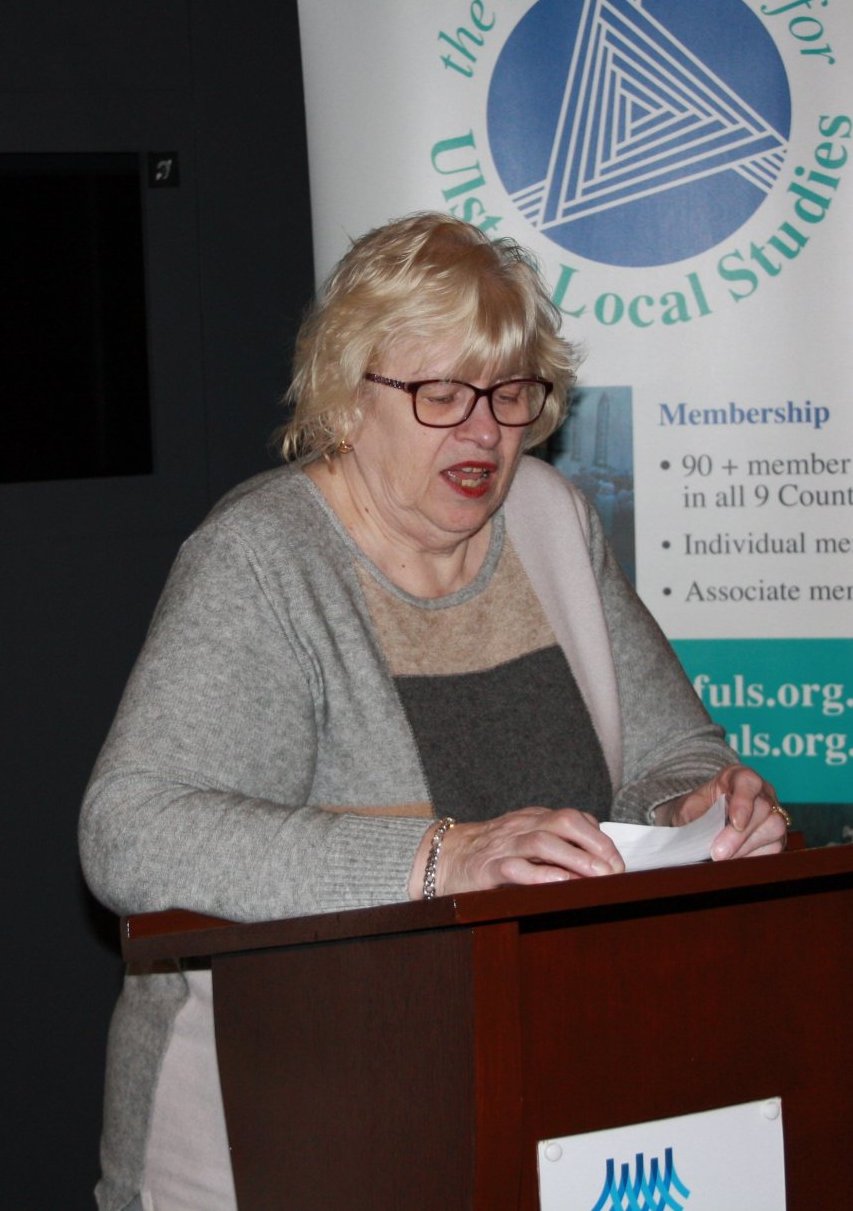 Helen Rankin, Carrickfergus & District Historical Society, said that we were meeting in a building that was on a multi-occupied site dating back to the twelfth century – a Franciscan Friary, that was the beginning of the town itself. She noted that all the artefacts that had been here when she left 10 years ago were still on display. The Carrickfergus Society was founded in November 1974, in the courtroom in the main town hall building. They still meet in the council offices. She had only been living in Carrickfergus since 1956 so was not yet ‘qualified’ as a resident. She was privileged to live in such a historic place. There was so much to see, so much to tell people. She came to work for the Council in 1974 and spent the next 30 years in historical research. At that time there was not much interest in local history but that was now beginning to change. The Society had built a new partnership with the Council and the Museum. Many new residents knew nothing about its rich history so there was much to do.

Helen mentioned John Hulme as a driving force for the project, using the Society’s bulletin to promote interest.

Finally, Shirin thanked everyone for their participation and the event came to a close.