The Exhibition was the last of six planned in Northern Ireland over the period since September 2016. Thanks Margaret Kane and Sean Corr of Libraries NI for their help in making it happen. In addition to these exhibitions one had been mounted in Letterkenny Library in October/November last year. 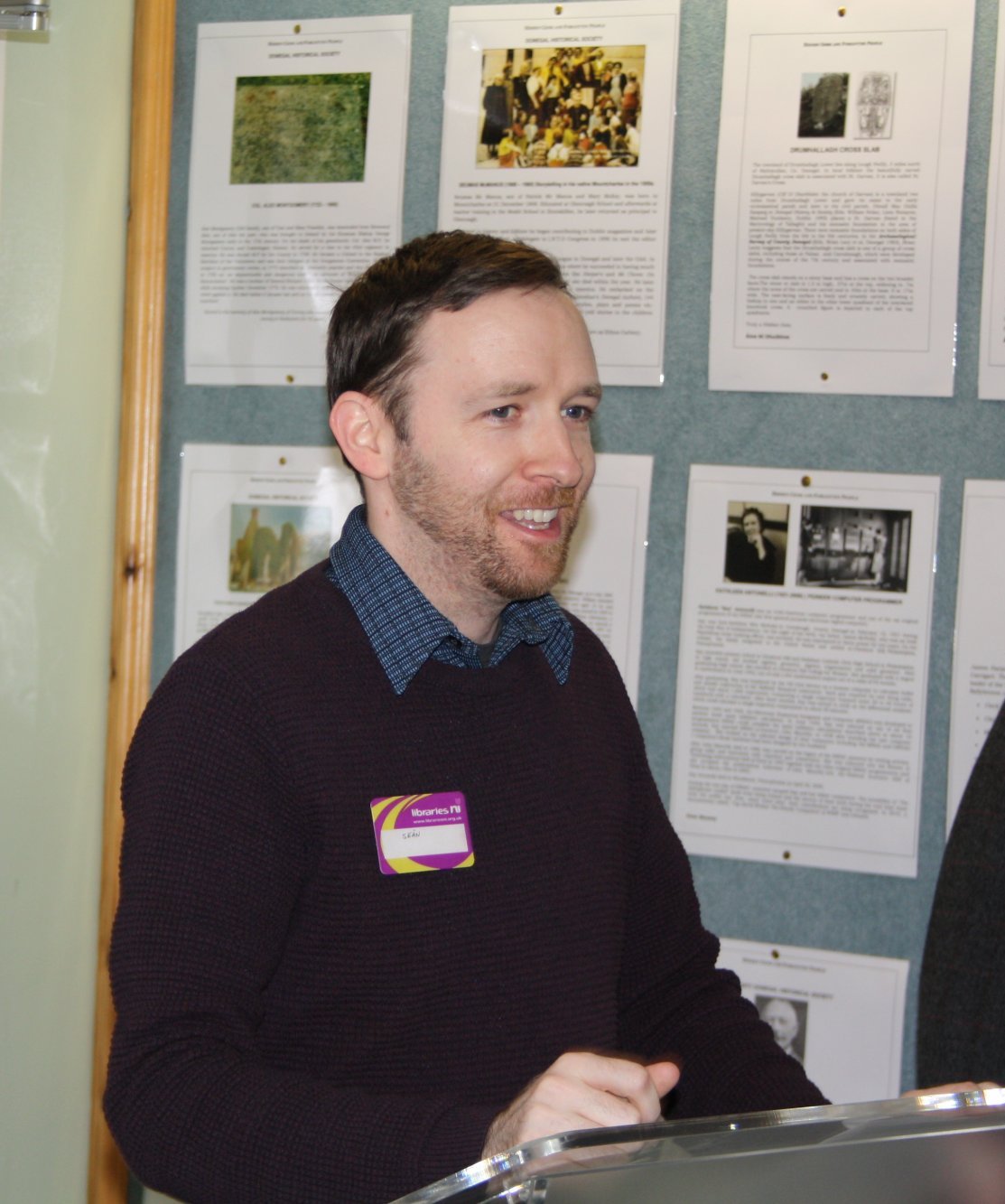 Sean Corr, Libraries NI, welcomed the speakers and guests to the Exhibition. The library was happy to host it and it would remain until 3 March. It featured people and places from all over Ireland and there were some from Fermanagh. One in particular, Jeremiah Johnston MP, was the subject of a talk that evening in Lisnaskea. He was sure that there was scope for many more, and he commended the Federations for their initiative. 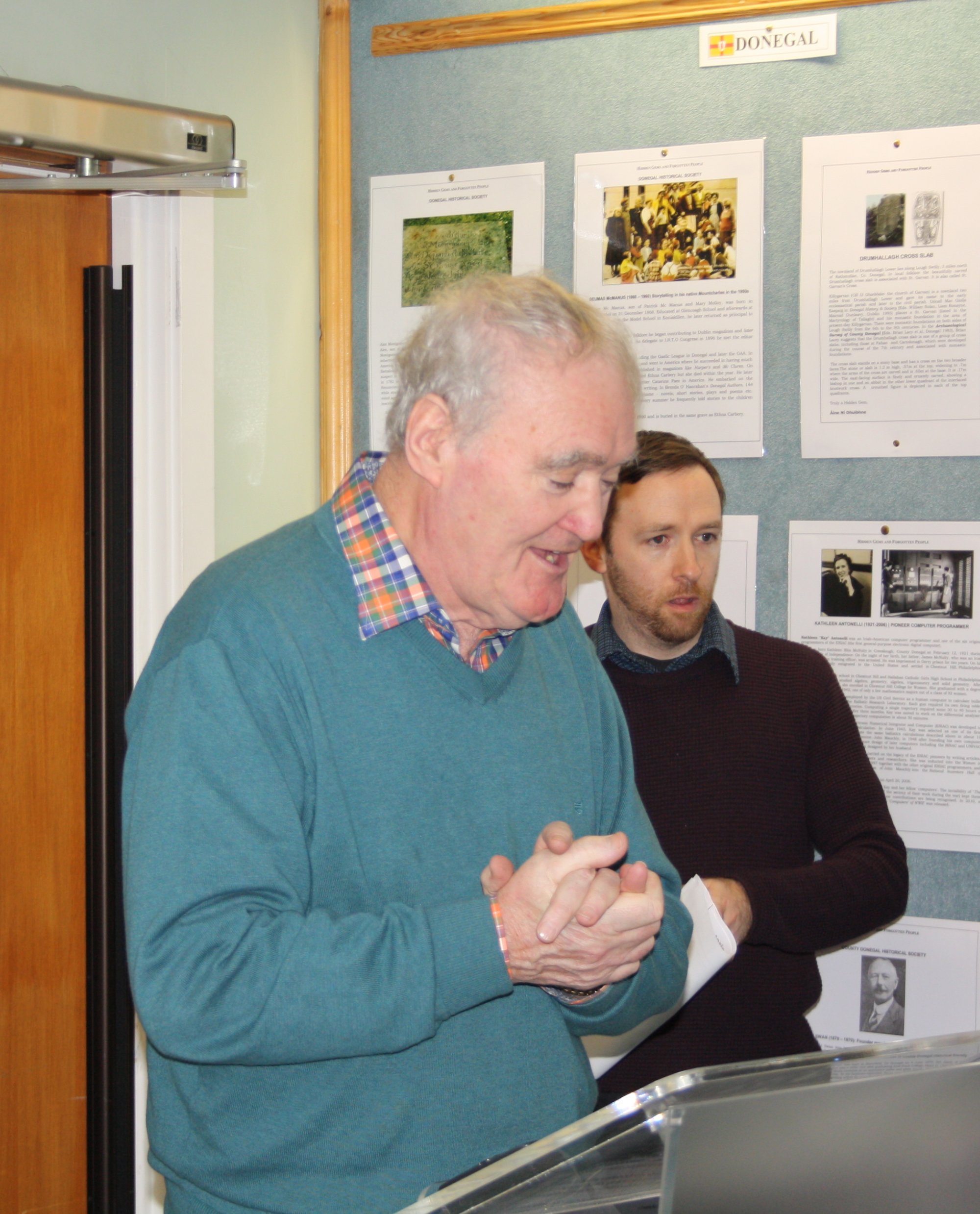 Johnny Dooher, Federation Chairman, said that the project had been launched by President Higgins in October 2015. A country-wide joint project with the Federation of Local History Societies it provided people with the opportunity to celebrate local heroes and link the local and national. It provided local people with the opportunity to explore aspects of their local history. The project was not complete, it was dynamic in character and limitless in scope. On the website there were currently more than 450 articles and the Federation was inviting socieies or other groups, or individuals, to get in touch with suggestions. So far, the feedback from people who had visited the six earlier exhibitions had been positive. He thanked the Library service for facilitating the programme.

Fred Ternan, Lough Erne Heritage, talked about the older, simpler life on the islands, the ‘wild’ campers, how tourism developed and how as a result much of the simplicity and local traditions and culture had faded. In discussion with local people some years ago, about how to document and retain the area’s rich heritage, the Lough Erne Heritage group had been formed. Since then much had been found and recorded, thanks to the help of the Library. The group was developing a website and planning a Heritage Interpretative Centre, or Maritime Museum with virtual reality technology, using the stories gathered from local families and other sources of artefacts and information. The 1901 Census recorded 400-500 people living on the islands – the islands were the hidden gems and the natives were the forgotten people who lived there. In one of the best-known books about Co Fermanagh there was no mention of the people. It was the inhabitants of the islands and the surrounding shores who built all the boats. In WW2 when George McQuillan was tasked with setting up a civilian operation in support of the RAF, many of the men he chose had an island background or experience of the use of boats in the lough.We are lucky that we still have the names of most of those employees. When local people can relate to the stries told it helps to unearth more. He hoped that their recent membership of FULS would encourage more research in the area local families to bring their stories forward. One hidden gem he had recently discovered was the Ulster Canal, he had heard about it but had never seen it. 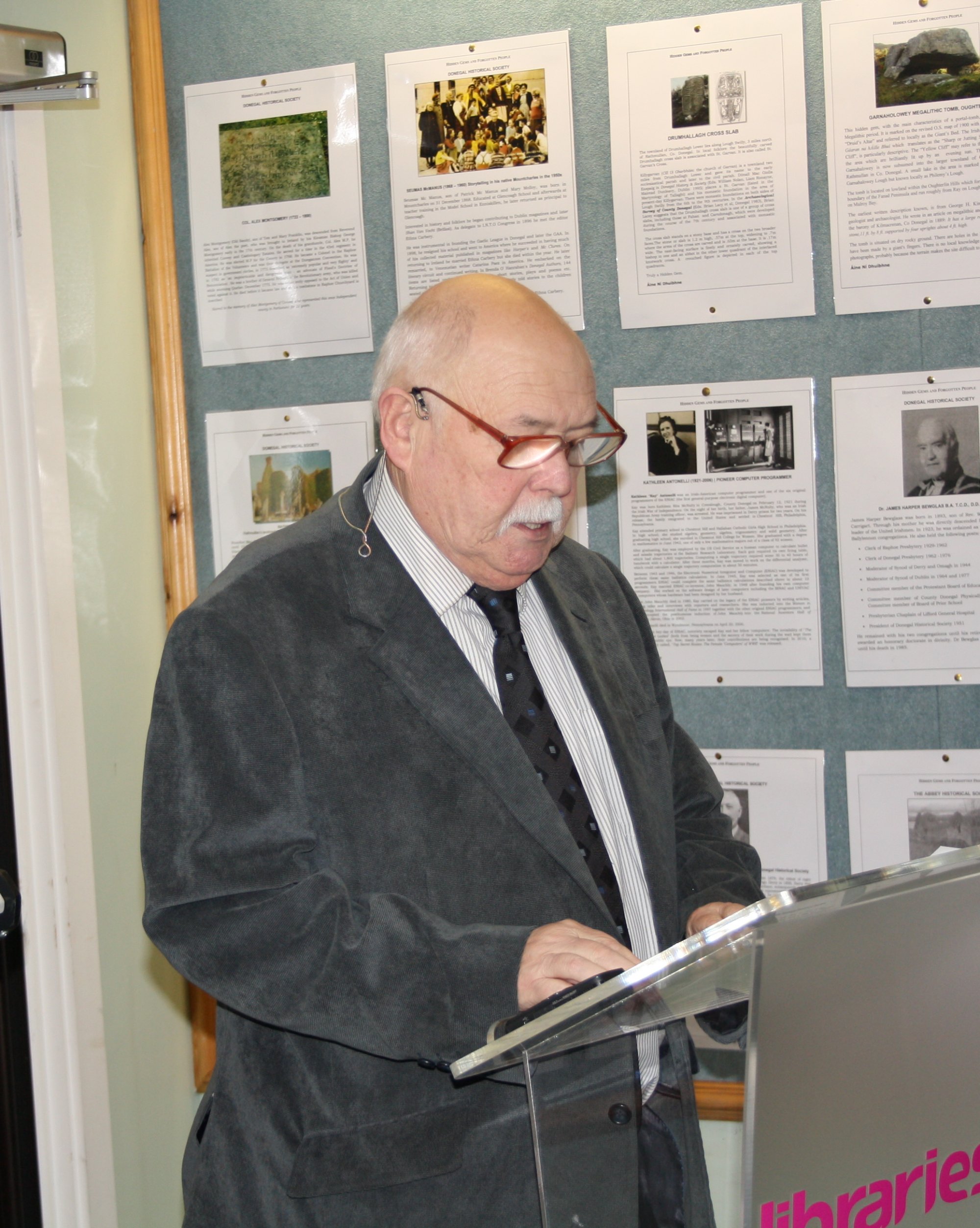 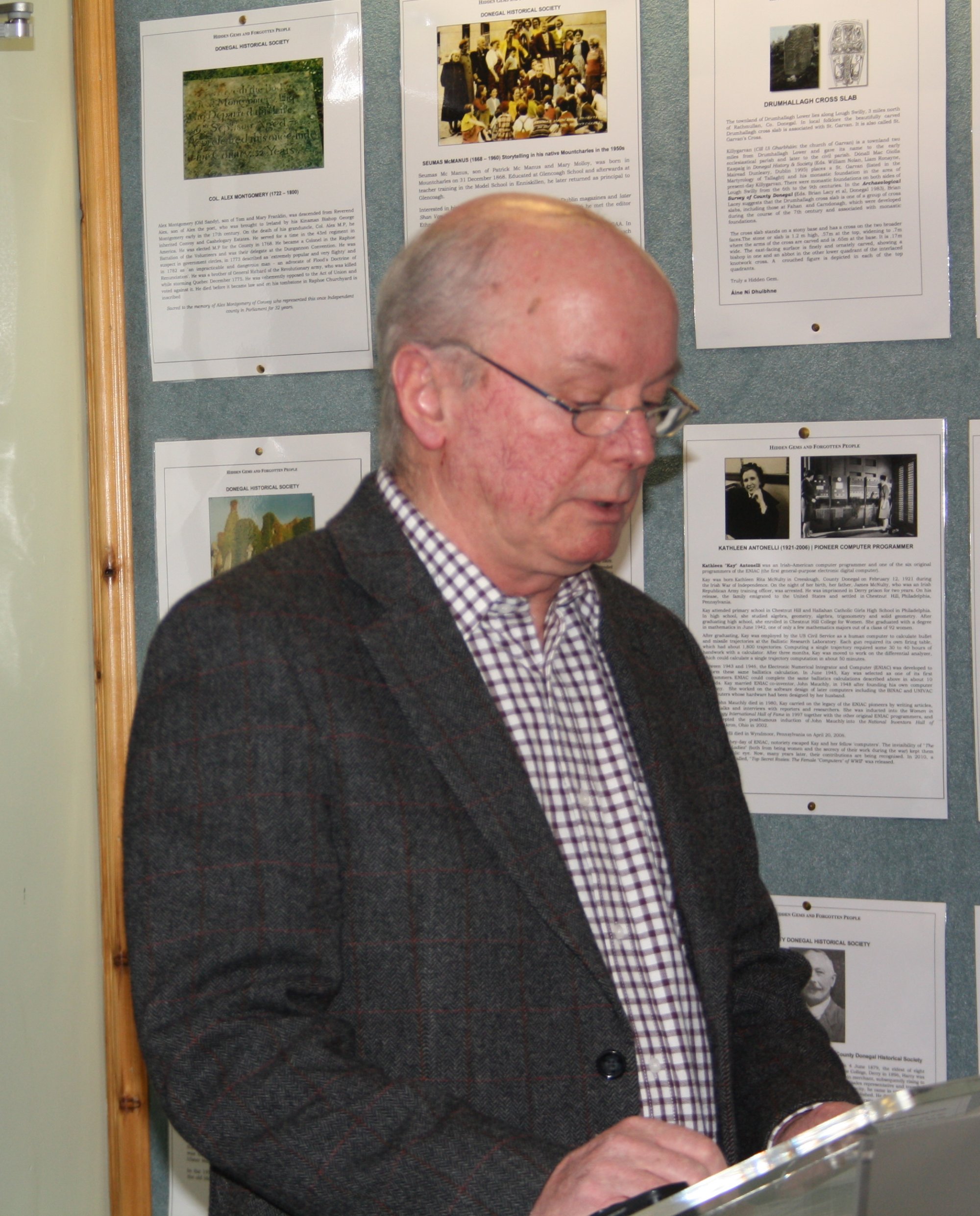 John B. Cunningham, well known local historian and writer, gave a brief summary of the project’s history. He talked about how social media had replaced the old ways of storytelling, like the ceilidh, where local news and gossip of the countryside was discussed and the life and times of local people, characters and places. Social media is all about the present; it is transient and barely acknowledges that the past exists at all. Often these ancient characters were remembered only in song such as the Highwayman, Black Frank McHugh, who hid away in the hills where Counties Donegal, Tyrone and Fermanagh meet until his life ended on the gallows, with four of his comrades, outside the old Enniskillen in 1780. He is remembered for his final speech, which he prolonged so much that the hangman urged him to draw his remarks to a close. To which he replied “For you it is a long day, but for me it is a short one”, and with this final show of bravado he was launched into eternity. His body was escorted by a flotilla of craft down Lower Lough Erne and buried in the ancient graveyard of Carne, near Pettigo. Fortunately the songs were recorded in print and in voice.

The forgotten people profiles reflected a wide range of calling and profession with broadly even gender balance. He provided potted histories of the Co Fermanagh people in the exhibition. He suggested that there was scope for many more. Many were already documented in local publications such as “Fermanagh Miscellany”, now in its 12th edition. Over the 12 years of production it had published over 250 articles from 40 different writers, each with an association with Co Fermanagh. He had identified at least 24 articles that could easily be adapted to the Project format. These included the Burkitts of Enniskillen, the senior of whom had invented the practice of ringing birds to trace their movements that revolutionised ornithology, and his son, a doctor, who mapped a type of cancer in central Africa that was named after him as Burkitt’s Lymphoma. Finally he hoped that the exhibition would inspire others to get involved and commended the Federations for their initiative.