Thanks to the co-operation of Libraries NI, this Exhibition was the second of six being mounted in libraries in Northern Ireland over the next year. Prior to the launch, members of the Federation’s executive Committee had met with representatives of some of the Societies in the area to plan the exhibition and manage the publicity. Thanks in particular is due to Josephine Herbison and Kate Orme for their contribution then and at the Exhibition itself. 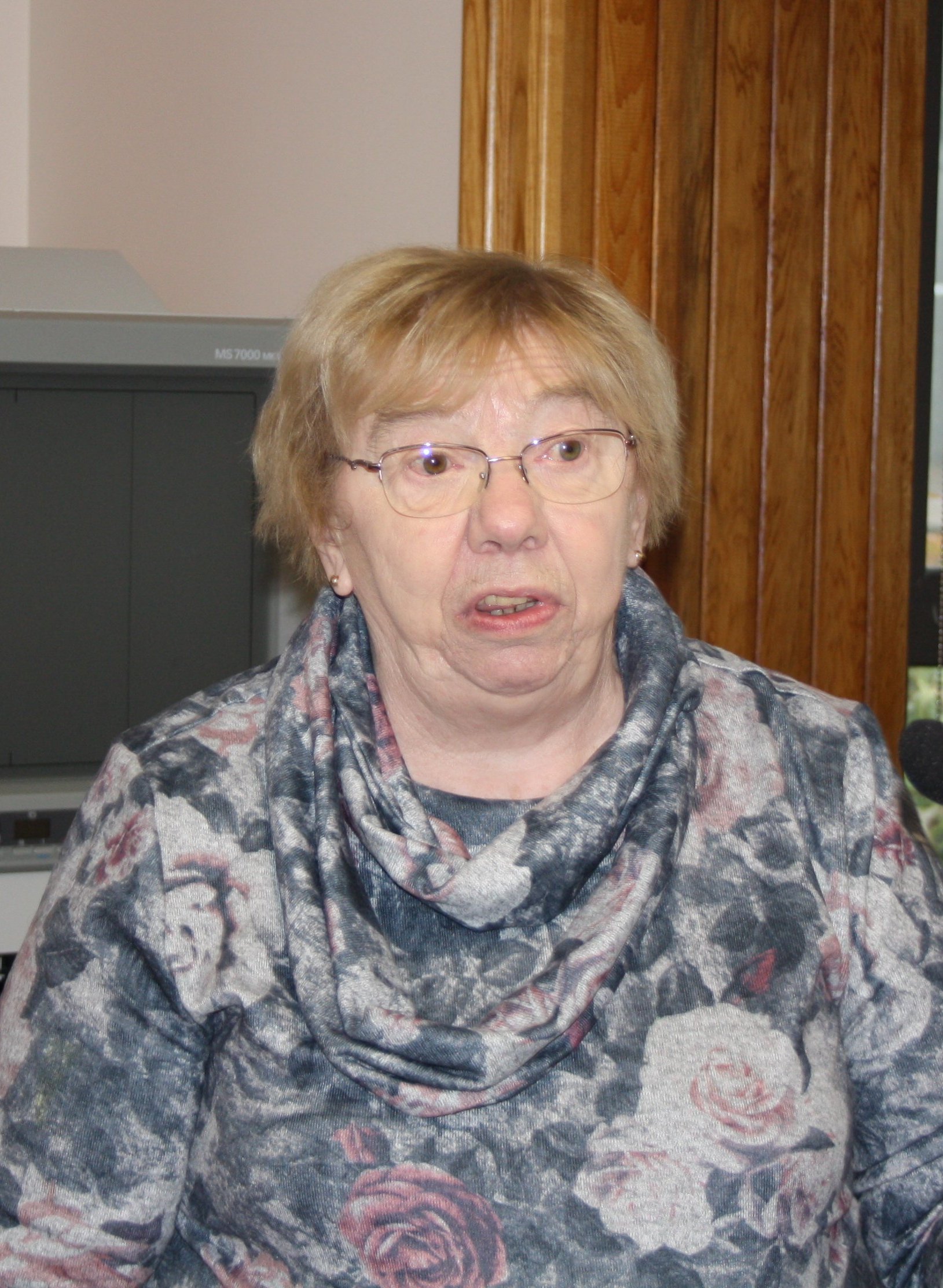 Josie Herbison, of the Antrim Historical Society, welcomed everyone to the launch of the second of the Exhibitions planned over the next year. What is a ‘gem?’ she asked. The dictionary definition referred to ‘a precious stone’ or ‘an outstanding person or thing’. What a delight it was when something one lost is suddenly found. ‘Forgotten’ means ‘clean out of mind or neglected’ In all our localities there are people of great worth, and places of great interest that had been forgotten for years. It was our responsibility to search, to find them and make them known. That’s what Hidden Gems and Forgotten People was all about.

Josie went on to list five people in County Antrim who fitted the description. Some were more ‘forgotten’ than others but all merited being recalled to memory. These were –

In conclusion Josie encouraged those present to begin searching to uncover all those hidden gems and forgotten people from their own places. When that story of someone or something of special significance has been found but had become buried with time, make it known, tell about it; then it will no longer be hidden or forgotten. 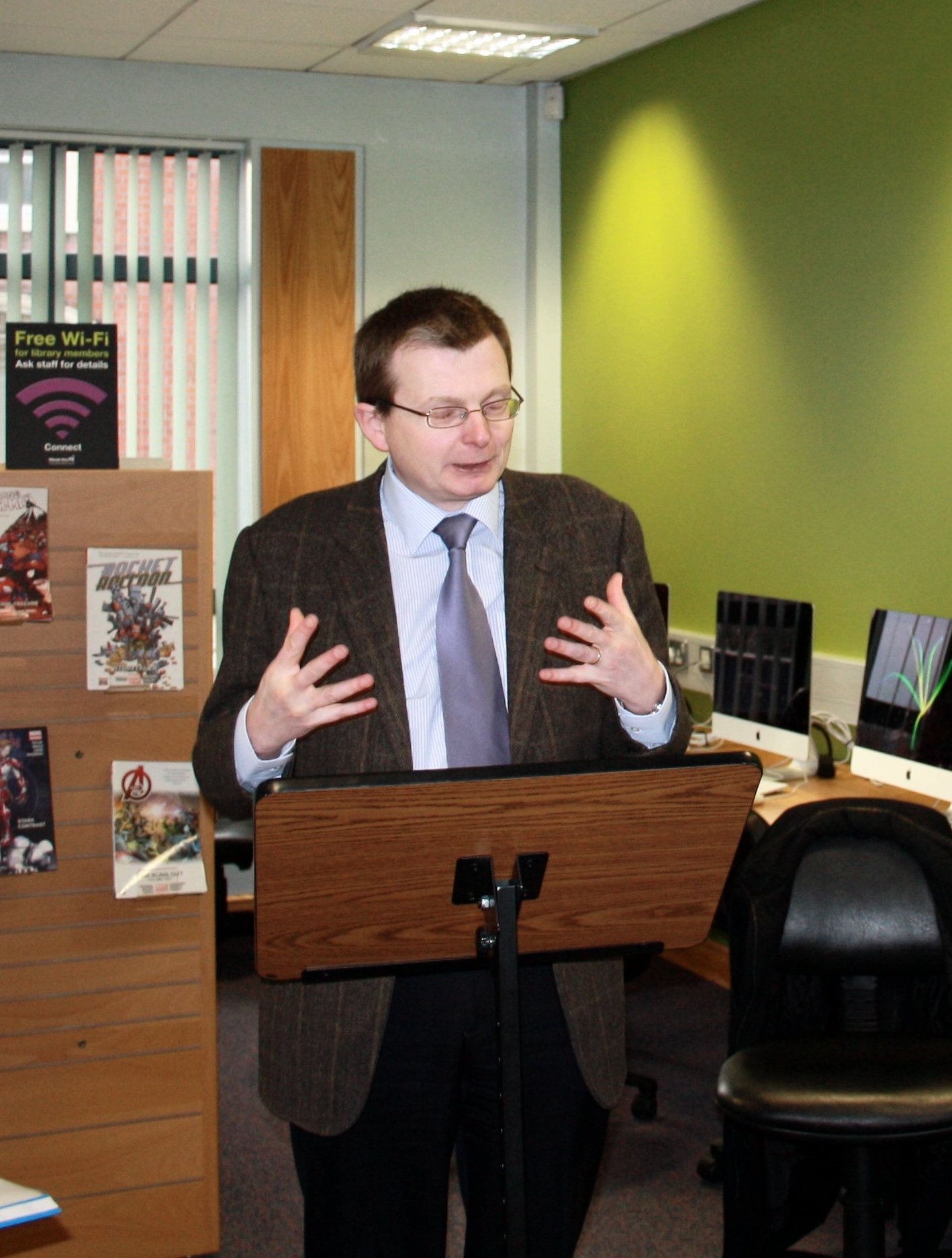 Dr William Roulston, Research Director of the Ulster Historical Foundation, said it was a privilege to be launching the Exhibition in this wonderful venue, a treasury of local history, where one can browse the shelves and perhaps uncover some of the many gems that lie hidden there. He congratulated those behind the project. He had enjoyed reading the website and had picked out a few that illustrated its value.

This was the sentiment of someone who loved his local area, treasured and valued it greatlyand through this project all of us have an opportunity to celebrate our localities. To research and write about them, to extract those gems from the mines in which they exist.

In conclusion, he quoted President Higgins who said – I wish you the very best with this wonderful project which I hope will develop and grow.

Pat Devlin thanked William for his inspiring address. A lot of the work of writing the material and placing it on the website is almost routine, but listening to William one realises that it can be inspiring to others, which was very encouraging. William’s examples called to mind similar extraordinary people in his own area, for example Jem Murphy from Carnally in South Armagh was local farmer with no education beyond primary who nevertheless was an authority on local geography and history. He knew every townland in the parish, including it past and present inhabitants and its history. He was an eminent local historian and regarded as such.

Pat said that the purpose of the project is to draw attention to and celebrate some of the lesser known but interesting places and buildings in our island, and to commemorate the very many remarkable and inspiring people who are not well known outside their own localities but whose stories are untold and almost forgotten, or who may have been well known in the past, but have now largely faded from memory. The details of these places and people are recorded on a special website, the details of which are in the literature, and are thus preserved for future generations, anywhere in the world. New material is added as it is received. The criteria for acceptance are relatively uncomplicated, the main ones being that the place or building must still exist, and the person must be dead.

There is a rich variety to be found on the website. The Forgotten People profiles reflect a wide range of callings and professions, with roughly equal gender numbers. There are artists and aviators, boxers, businessman and businesswomen, diplomats, engineers and entertainers, international civil servants and journalists, teachers, suffragists, sportspersons, singers, scientists and social reformers, soldiers and sailors, photographers, physicians and philanthropists, writers, playwrights and poets, Victoria and George Cross recipients, and ‘ordinary/ extraordinary’ people. Local familiarity, and the fact of being taken for granted, can sometimes prevent many of these gems becoming more widely recognised and thus they can remain hidden from the rest of us. However, each one has a story to tell and that story is part of our wider local history. Many people who have contributed significantly to the local area, and in some cases to the wider world, may remain unrecognised and, sadly, forgotten.

Most districts can lay claim to sportsmen, storytellers and other characters of note that, while little known outside of their own communities may be iconic within its history. This website provides the opportunity to rescue such forgotten personalities and hidden treasures from obscurity and allows them to take their rightful place in the story of our wider history.

This Exhibition is the second of nine, six in Northern Ireland, planned over the next 12 to 18 months. We were fortunate to have the help and support of Libraries NI, which has agreed to the use of their libraries for the Exhibitions. He thanked Mary Bradley and the staff of the Ballymena Central Library for their help in setting this one up, and the other Heritage Managers who will be involved in the next four Exhibitions in their Libraries. When these are completed the plan was to exhibit in Donegal, Cavan and Monaghan.

Pat thanked colleagues in the Federation of Local History Societies. The Federations cooperates under a common brand name – “History Federations of Ireland”. It was a very fruitful partnership, planning joint events and projects, like this one, and arranging exchange visits and trips to historical places at home and abroad. The Federations met about six times a year, alternating between Belfast and Dublin. He also thanked colleagues on the Executive Committee for all their work in making this Exhibition happen, and in particular John Hulme, a real enthusiast for the project who was worked tirelessly to publicise its value to member societies and further afield.

He hoped this event had sparked interest and perhaps helped people think of some Gems and People in your own locality. The Federation was ready to help work these up, with full acknowledgement of the contribution on the website. He suggested people take the opportunity to sample the Exhibition and commend it to their families, friends and colleagues. There was a supply of leaflets about the Exhibition, the project and about the Federation. He invited people take some, to give to friends and colleagues.

Following refreshments, people visited the Exhibition, many expressing their appreciation of and interest in the project. The next Exhibition will be in Derry Central Library in February next.