The Exhibition in the National Library in Dublin, launched by the President, Michael D. Higgins, on 8 October 2015, was a major success. More than sixty people from all over the island attended. The President was very supportive and wished the Federations every success. Following the Dublin launch, the Federation’s Executive Committee decided that a longer-term approach could help the Project to become more widely known throughout the province and participation increased, not just from historical societies, but from the wider public. Libraries NI has been very helpful in planning the programme by allowing use of the library service to deliver a travelling exhibition through Northern Ireland over the next year.
Over eighty people attended the launch of the first exhibition in Belfast, a report of which follows.

FULS Chairman, Pat Devlin, welcomed everyone to the launch of the first of nine Exhibitions planned over the next year to publicise the joint FULS/ FLHS project and website knows as Hidden Gems and Forgotten People. The project aimed to record, bring to wider attention, and celebrate, people from every part of the island of Ireland, who had made a difference in their local areas or further afield but whose achievements were in danger of being lost to memory. Similarly, there were places; buildings, geographical features, old industrial workings or other locations that did not feature on tourist maps or guides but were nevertheless worth recording. As President Michael D. Higgins, President of Ireland said, at the launch of the Exhibition in Dublin on 8 October last year – It is not, I believe, an exaggeration to say that the sense of connection to place, to the past, in all its manifestations, and to those memories, are vital elements for the quality of our lives and for all the well-being of our society. He thanked Libraries NI for the use of their local Libraries to mount the exhibitions, and Heritage Manager Catherine Morrow for all the work she had put into this initial one. He acknowledged the work put into the project by colleagues in the two Federations. The Exhibition would remain in Belfast for four weeks. 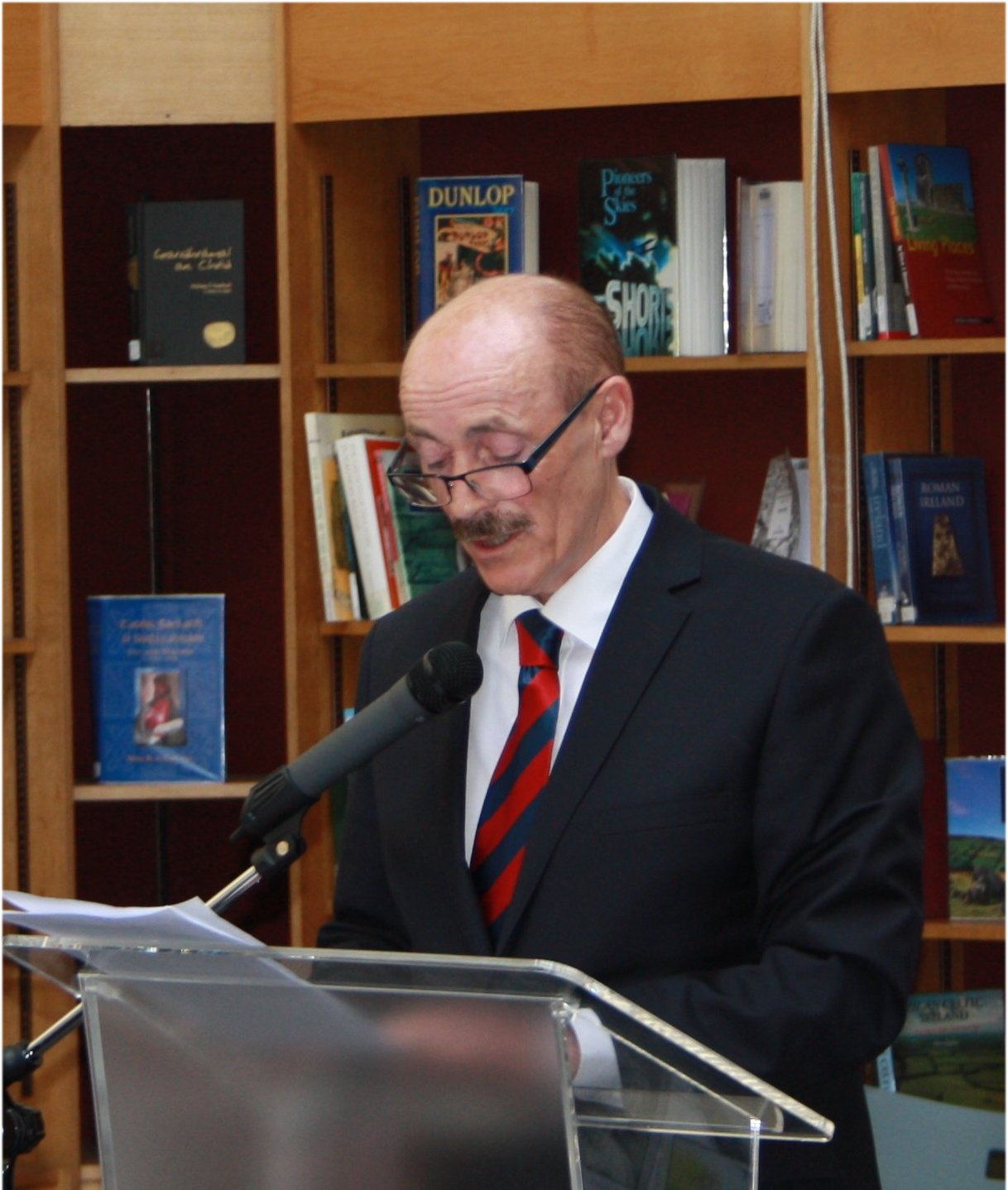 Michael Gaynor, Chairman of the Federation of Local History Societies, said he was delighted to be at the official launch of the Exhibition programme here in Belfast Central Library, a landmark building, having opened its doors in 1881, and forming part of the Victorian cityscape that gives Belfast so much of its distinctive character. A most excellent reference library; its Irish Studies section houses one of the best collections of local and Irish material available to the general public in the province.

This was a joint project of the two Federations which had a long history of friendship and cooperation. The project uses a common website. It presents an opportunity to rescue many worthy people from obscurity to take their rightful place in the history of our national culture. Many communities can lay claim to people who may be iconic in their localities but are little known elsewhere. The Hidden Gems project exemplified the fruits of working together to promote local history study throughout the whole island of Ireland. Local history is to be found in every community, urban and rural, in every part of Ireland.

Local people should be vigilant in recording and protecting local features. Michael related the account of the discovery, in June 2016, of a seventeenth century castle, lost for over 200 years, in Clones County Monaghan. It was discovered in the centre of the town behind a Victorian terrace called Castle Street, which contained a building called Castle House. Shirley Clerkin Monaghan county heritage officer said that it shows that “when you start opening your eyes, looking afresh at things, you can rediscover really, really interesting buildings”. Could she in fact unknowingly, be talking about Hidden Gems and Forgotten People Project? Expressing these sentiments is exactly what our joint project is all about. Sometimes familiarity and taking things for granted can prevent these gems from becoming more widely recognised, and remaining hidden from the rest of us. Each place has a story to tell and that story was part of our wider local history.

The project also provided a platform where people could share their own “hidden gems” and perhaps hear something new about their own locality. Such sharing formed a bond that can contribute to a real sense of community. The project should reawaken within local communities an appreciation of their history and an understanding of the importance of discovery, and recovering the events and people of the past.

The Ulster Federation had been to the forefront in driving the project with County Antrim contributing over 80 articles, the highest of any county. Michael thanked Pat Devlin, John Hulme and Larry Breen for their continuing contribution to the project. He quoted Anthropologist Margaret Mead who is said to have remarked We should never doubt that a small group of thoughtful, committed citizens can change the world. Indeed, she added, It’s the only thing that ever does.

Pat Devlin said that when the Executive Committee was planning this Exhibition programme there was much discussion about who we would ask to launch it. The suggestions included names from the political, historical and media worlds. In the end, we found exactly the right person in Tom Hartley. Tom had a long and distinguished record in the political and historical fields over many years in his native city, serving as a Councillor for twenty years until 2013 and Lord Mayor in 2008-2009. Tom’s deep love for his city and its history was reflected in his two remarkable books about the City Cemetery and Milltown Cemetery. Written eight years apart they examine the personalities – Catholic, Protestant, Muslim and Jew – that shaped their native city, and tell the story of the city itself, the institutions, the industry, the events, the conflicts, and the catastrophes that shaped it. Tom conducts tours of the cemeteries and fascinating they must be, from someone so steeped in the complex history of Belfast. The cemeteries were a repository of hidden gems and forgotten people, and many were identified in Tom’s books. The website also had some of them. 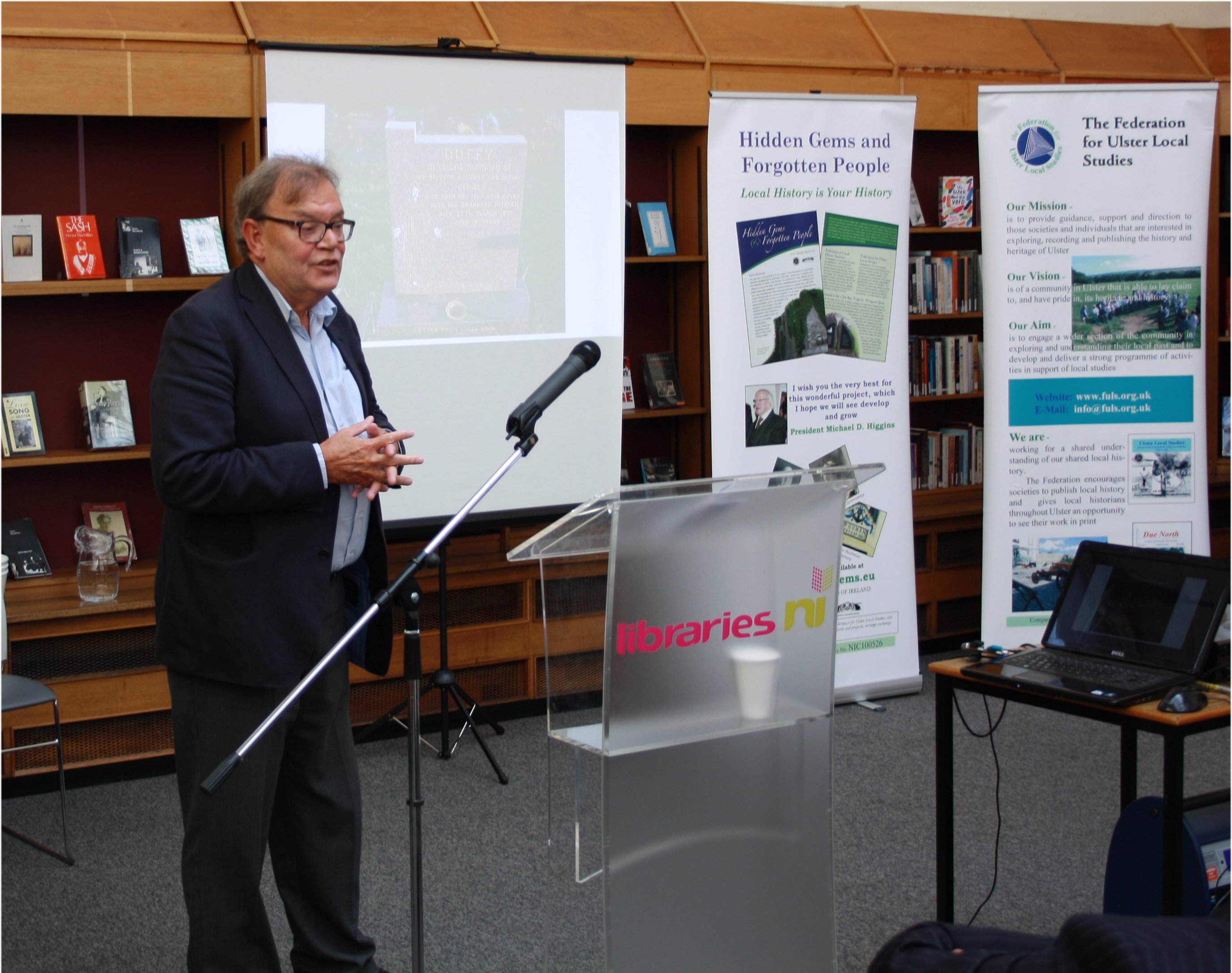 Tom Hartley said he was honoured to have been asked to launch the Exhibition, and to be with people who had mapped out the history of townlands, parishes, towns and cities. There is a wealth of information now available for people to research, to find out where we came from and the people who make up the narrative of this island. His appreciation of local historians was stimulated through contacts with Bridie Bradley and Patrick Greer of the West Belfast Historical Society and their dedication had always impressed him. He talked about his experience in researching the history of Belfast; in particular, the Cemeteries of Belfast – those great powerhouses of history. When he set out to research the Cemeteries he had to evolve a process, which was still evolving. To begin with he walked the cemetery, photographing every headstone because he had learned that the eye tells lies e.g. ‘Irvine’ becomes ‘Irwin’. So, photographs were a very basic element of his research. The other basic element was maps. He illustrated this by an aerial map of West Belfast which gave him a wider historical perspective in that features such as iron age forts were visible. The original Belfast Cemetery was in the shape of a bell and this was still visible within the larger plan. When he started, there were no cemetery maps so he began by designing one which is now used by Belfast Corporation. This was in place before he wrote anything because he wanted to know the cemetery inside out. The Cemetery opened in 1869. In 1871 the Jews of Belfast asked Belfast City Council for a piece of land and was granted with the stipulation that they erect a wall – they didn’t want people to see a non-Christian burial. These is an old hidden section that contains the graves of people whose bodies had been left to medical research or teaching in Queen’s University and interred there afterwards.

He had done the same for Milltown Cemetery which proved to be even more complex, having developed in six big clumps with each ‘clump’ having different grave reference numbers. One group, Clonard Monastery, had started in the mid-1970s, with earlier burials in the Monastery Crypt. He had then mapped the graves in the Crypt. There was also a small graveyard in St. Dominic’s where the nuns from the Dominical Convent were buried. He mapped these also.

Turning to individual gravestones he illustrated the wealth of hidden information about social conditions hidden there. The Herdman stone was in a style known as Egyptian Revivalist, with the double-headed falcon of the Egyptian God Ra and the Corinthian columns. However, there was also a ‘Templar Cross’ and other structures which made his suspect that it was a monument of a 33rd degree Mason in the Ancient & Scottish Rite. He illustrated another aspect of Victorian Society by pointing to the headstone of Margaret Byers, founder of the Victoria College, from which many influential women had graduated, and a prominent figure in her own right, who is described merely as ‘widow of Rev. John Byers’ who had died some 50 years before she did. That said it all about the place of women in the earlier part of the last century; they were written out of history. He also described two other gravestones, one of Sadie Hale, a typist on the Lusitania that was torpedoed off Cork in 1915. She was brought to Belfast and buried in the Republican Plot. The other was of her father, buried in a British war grave nearby. Such was the complexity of society in that part of the century. Tom went on to discuss his current work in mapping the Balmoral Presbyterian Cemetery and the lessons he had learned about the complexity of the evolution of Presbyterianism, illustrating this with a timeline of major spin-offs of different groupings.

In summary, his address was a tour d’horizon of the evolution of the city through its graveyards. 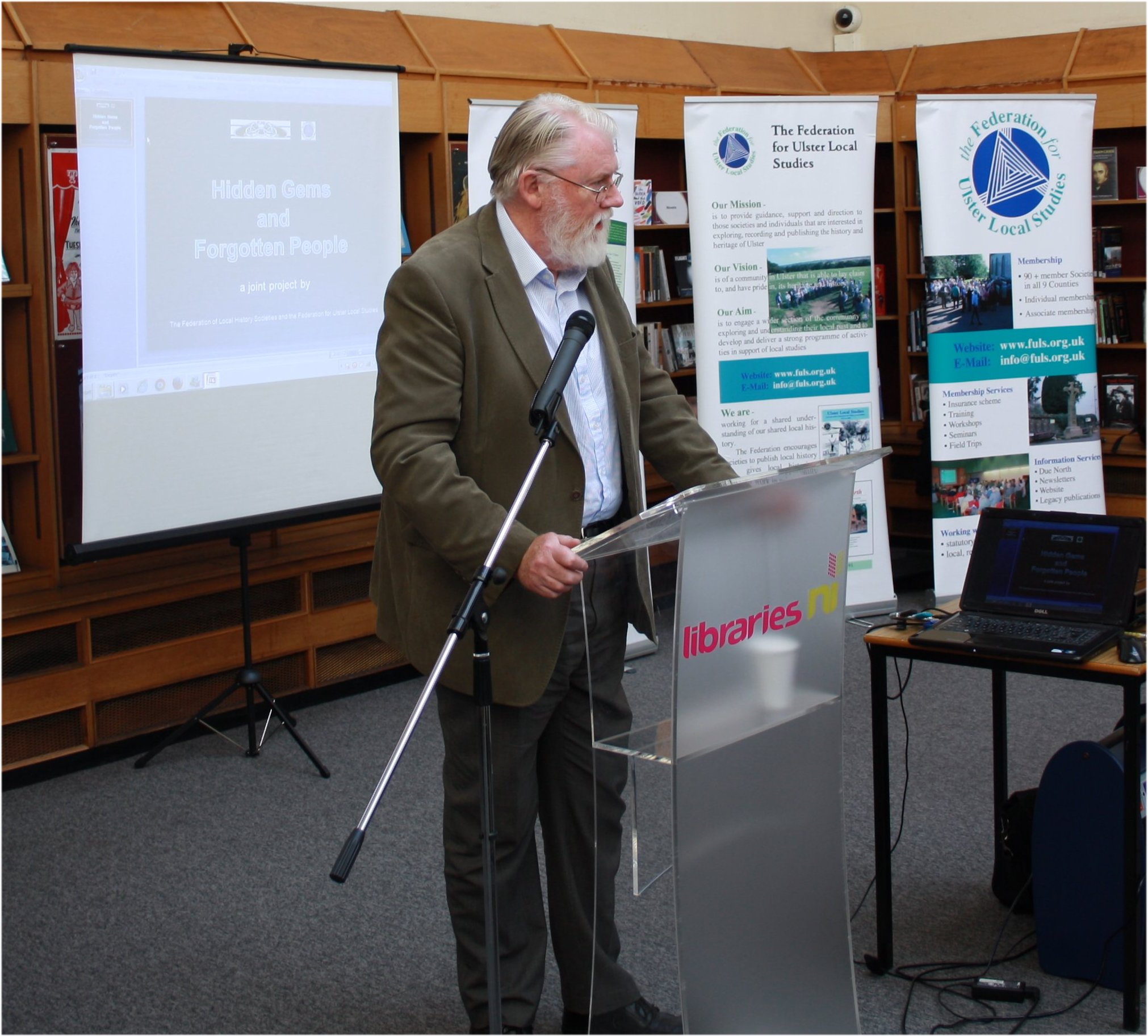 Dr Brian Turner, Federation Vice-Chairman, said that he lived in County Down, was born in Cork and spent his formative years in County Donegal so he was pleased to be addressing an audience made up of members of local history societies from north and south. He talked about the genesis of the Federation, at a meeting called by the County Donegal Historical Society in Ballybofey in 1974, followed by the first conference in Coleraine in 1975. It would have been sensible at any time for local historical societies to communicate with each other, to learn, to share, and to form social bonds. But the early 1970s, in particular, was the middle of the worst period of our ‘troubles’ when atrocity after atrocity was pushing people into inward-looking defensiveness.

One of the essential merits of local study is that it looks at our history on a human scale where we can see ourselves and our neighbours as part of the same story. Telling the story of particular localities also shows that each place has its own worth and helps us to confound stereotypes. He suggested that it was no accident that at a time of social upheaval, our local historical societies had an unprecedented period of growth, quadrupling in numbers during the 1970s and continuing to grow thereafter. People wanted to know how things came to be the way they were on both an impulsive and an intellectual level. Local history is about introducing ourselves to each other. It is not national history writ small. It is important in its own right, and he commended the continuing work of our local historians. They should enjoy it and know that it is valuable.

Following refreshments, people visited the Exhibition, many expressing their appreciation of and interest in the project. Overall it was a good start to the programme of exhibitions which would move to Ballymena in November.