As in previous years, our choice of the “Heart of England” for our visit was an inspired one. The trip was fully booked with fifty-one local historians from all over the island meeting the Dublin ferry for the start of the journey.

Unfortunately, we were without our good friends John & Jenifer Hulme who were unable to travel but we had them in our thoughts during our visit.

We left Dublin Port on a fine morning and had a very smooth crossing arriving safe and sound on Welsh soil. We travelled through north Wales and made a stop at Chester. Arrived ok in Lemington Spa, had a lovely dinner and were all in bed early ready with anticipation for the start of our adventures in the Heart of England.

After breakfast in the Angel Hotel, we met up with our guide, Ian Jelf, and what a find he turned out to be. Suitably fed and watered we headed north for Coventry with Ian taking the scenic route and managing to give us a “sneak” look at the ruins of Kenilworth Castle. Our first stop was the Cathedrals in Coventry. What a treat this was. It was something special to be able to compare and contrast the 14th Century Gothic St. Michaels, now in ruins, with the new St. Michaels built after the former was destroyed by German bombing during WW2. The old Cathedral ruins remain hallowed ground with only the tower, spire, outer walls and the effigy/tomb of the first Bishop surviving. The new cathedral consecrated in 1962 was special with many unique and impressive features including Graham Sutherland’s huge tapestry, the “Mater Dolorosa” sculpture by John Bridgeman, the baptistery windows by John Piper, the stained glass windows of the Nave and much more. We learned the story of the charred cross and the “cross of nails”, the latter becoming a symbol of peace and reconciliation all over the world. 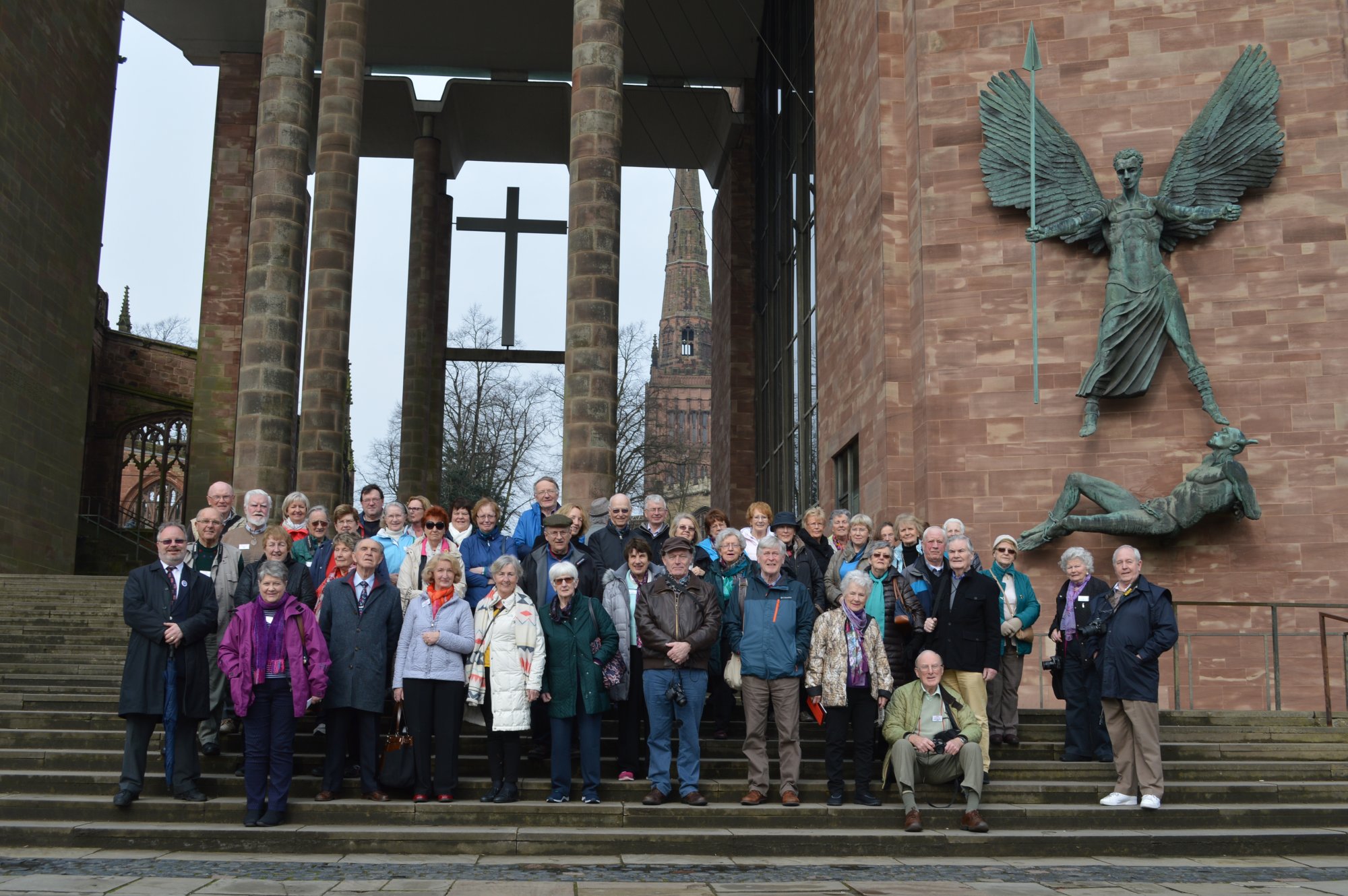 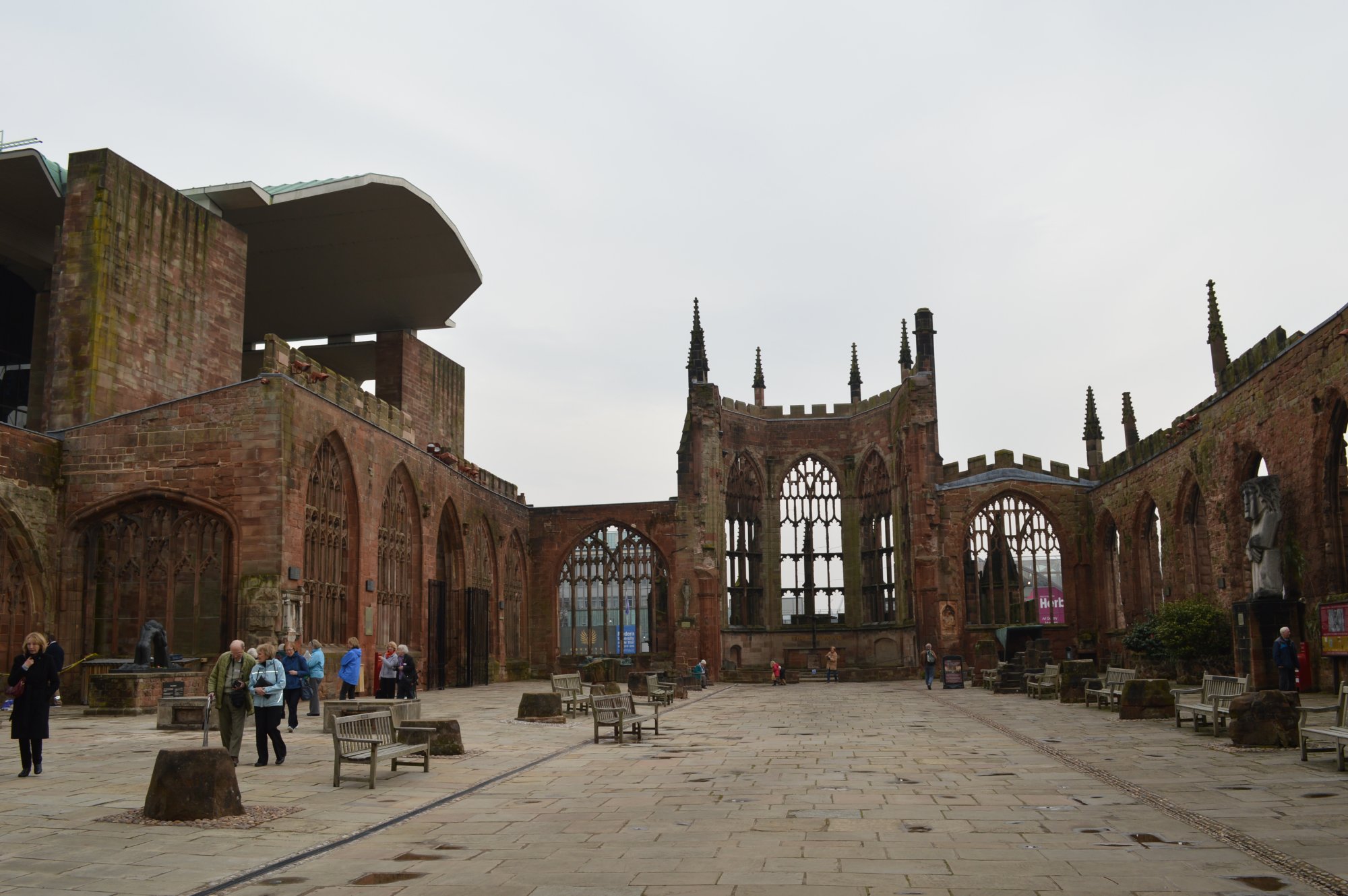 Ruins of old Cathedral
It was then on the road again travelling further north to Staffordshire and Shugborough Hall & Estate. The Estate and House were formally owned by the Bishops of Litchfield and later by an ancestor of the Earls of Litchfield, William Anson. Today it is “the complete working historic estate” boasting among many other things the only log-fired brewery in England. We enjoyed a memorable day visiting the staterooms, the private apartments and also the gardens and had a lovely lunch in the Shugborough Hall tea rooms. Our journey back was made all the more interesting by Ian’s excellent commentary along the way. Ian took us through Litchfield telling us all about the town and we managed to catch a glimpse of Litchfield Cathedral with its famous spires. That evening we were privileged to be entertained by local Historian, Margaret Rushton, from the Leamington Historical Society who talked about Leamington and what was happening on the local history scene.

After breakfast it was off to Shakespeare’s country and the beautiful Stratford-upon-Avon. Ian took us as usual on the scenic route through the lovely Warwickshire countryside and through many of the picturesque villages on route. Anne Hathaway’s Cottage awaited us and we were not disappointed. Set in its own beautiful gardens it presented a wonderful picture in the morning sunshine. There followed a fascinating tour of the house which contained much of the original furniture and captured the atmosphere of that period in the life of the family.

We took a coach tour of the village seeing all the houses associated with the bard and made a visit to the Holy Trinity Church to see the last resting place of William Shakespeare.

After lunch we had some free time to stroll around the village and taste the atmosphere. We then bade farewell to Stratford and travelled on to Warwick Castle. Guided by Ian, this medieval castle developed from the original built by William the Conqueror in 1068 proved to be something special. One could not but be impressed by the whole scene including the Great Hall with its impressive pristine pieces of equestrian armour and the unique huge cauldron known as Guy’s “Porridge Pot”. The interior was awash with spectacular rooms including the State Rooms, the State Dining Room, the Red Drawing Room, the Green Drawing Room, the Cedar Drawing Room, the Queen Anne Bedroom, the Blue Boudoir and the Chapel. Outside and within the castle walls the central lawn is surrounded by the ramparts and presents a stunning view of the building. It was with some degree of sadness that we left Warwick to make our way back to Leamington. We did have time to stop and Ian took us on a walking tour of Leamington. A Spa town with the Royal Pump Rooms opening in 1814 it afforded us a most pleasant walk. It was granted the “Royal” prefix in 1838 by Queen Victoria whose statue stands proudly in the centre of the town. We had a leisurely walk through Jephson Gardens, seeing notable attractions including Lansdowne Crescent, the Town Hall, the “Elephant walk” and many of the town’s variety of Georgian and early Victorian architecture. 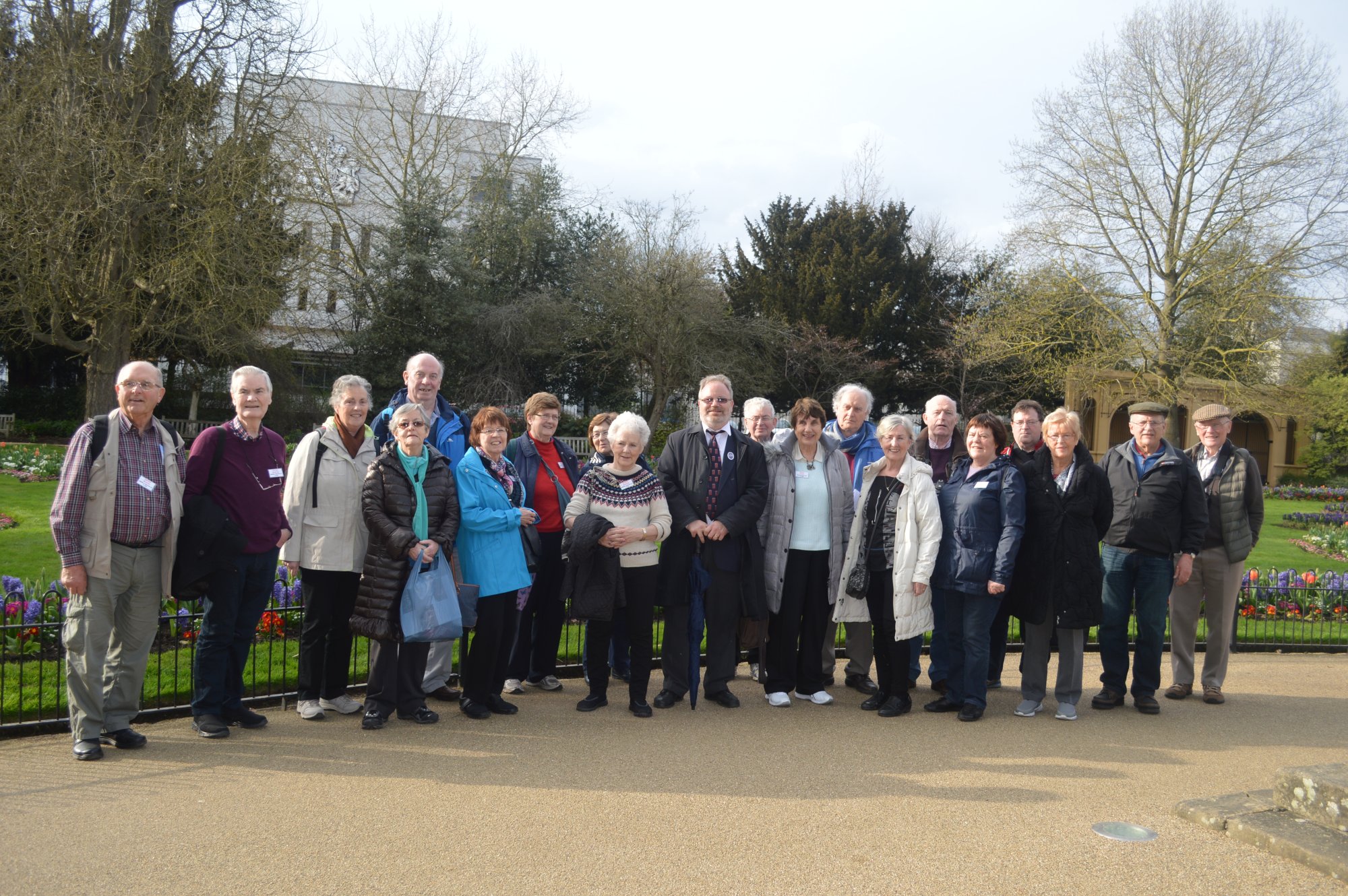 The third day of our adventures took us south to the magnificent Blenheim Palace, principal residence of the Dukes of Marlborough. Built in the short lived English Baroque style between 1705-1722 it was a magnificent sight to see. Blenheim was the birthplace of the 1st Duke’s famous descendant, Winston Churchill and we were able to follow his life and times in viewing the permanent exhibition in the suite of rooms in which he was born. Steeped in history it presented a host of impressive and decorative rooms including the Chapel, the Library, the Salon and many others. The architecture was just breathtaking with a stunning building surrounded by some lovely gardens. We had a special treat before leaving Blenheim when we had our lunch in the Spencer-Churchill room with a panoramic view of the palace grounds. 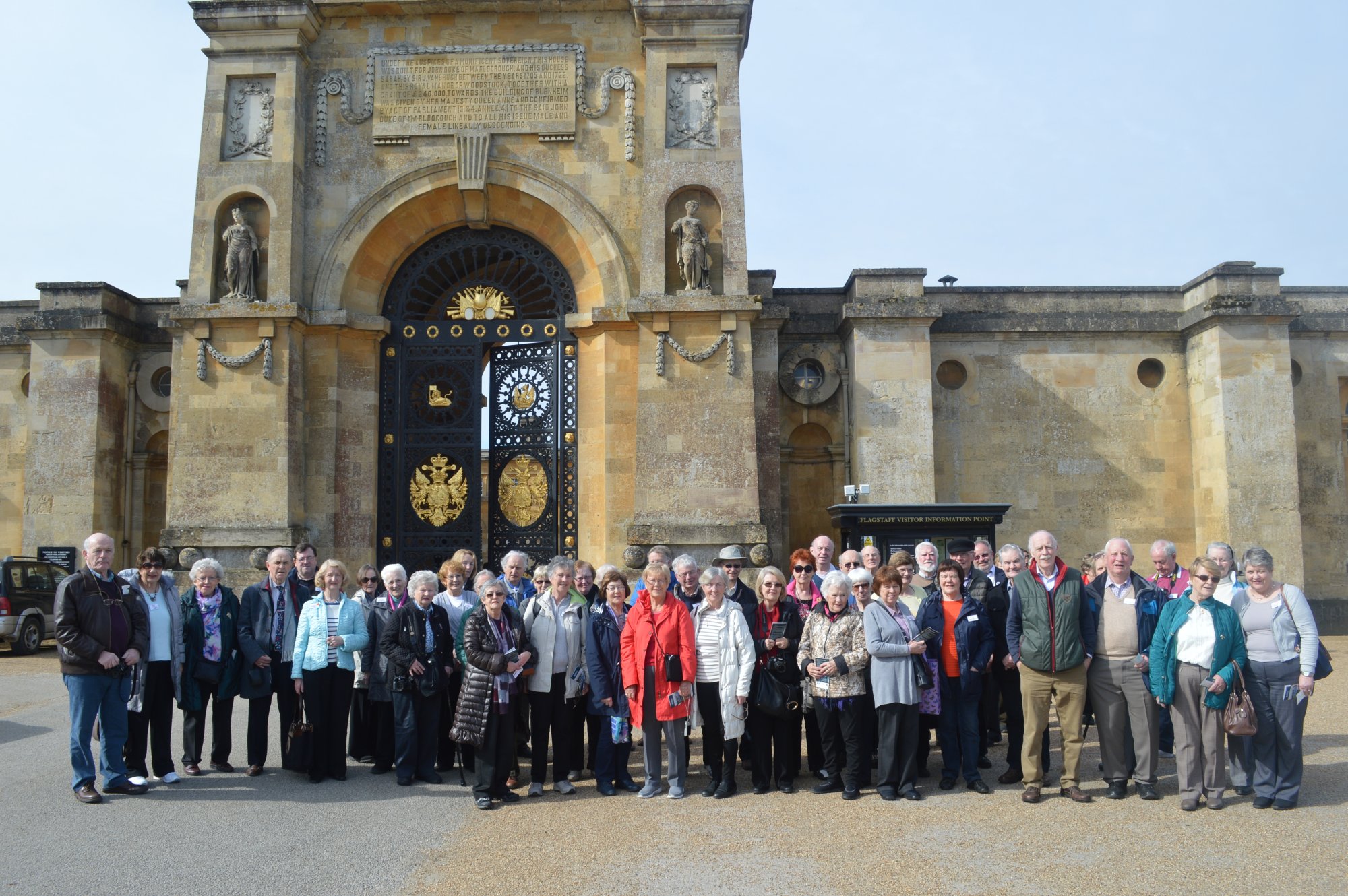 The university city of Oxford was to be our last port of call. We toured the famous Christ Church College, the biggest of the many colleges in the university, and walked through its impressive courtyards and grounds. The Cathedral was most impressive with many fine stained glass windows, beautiful ceiling and intricate wood carvings.

Our guide, Ian, then took us on a linear walk past many of the beautiful and architecturally impressive buildings which go to make up this wonderful city. Included were the Great Quadrangle of Christ Church College, the Radcliff Camera, University College and the Bridge of Sighs. There were too many to mention all. It was a memorable day filled with history, beautiful gardens, and impressive buildings. 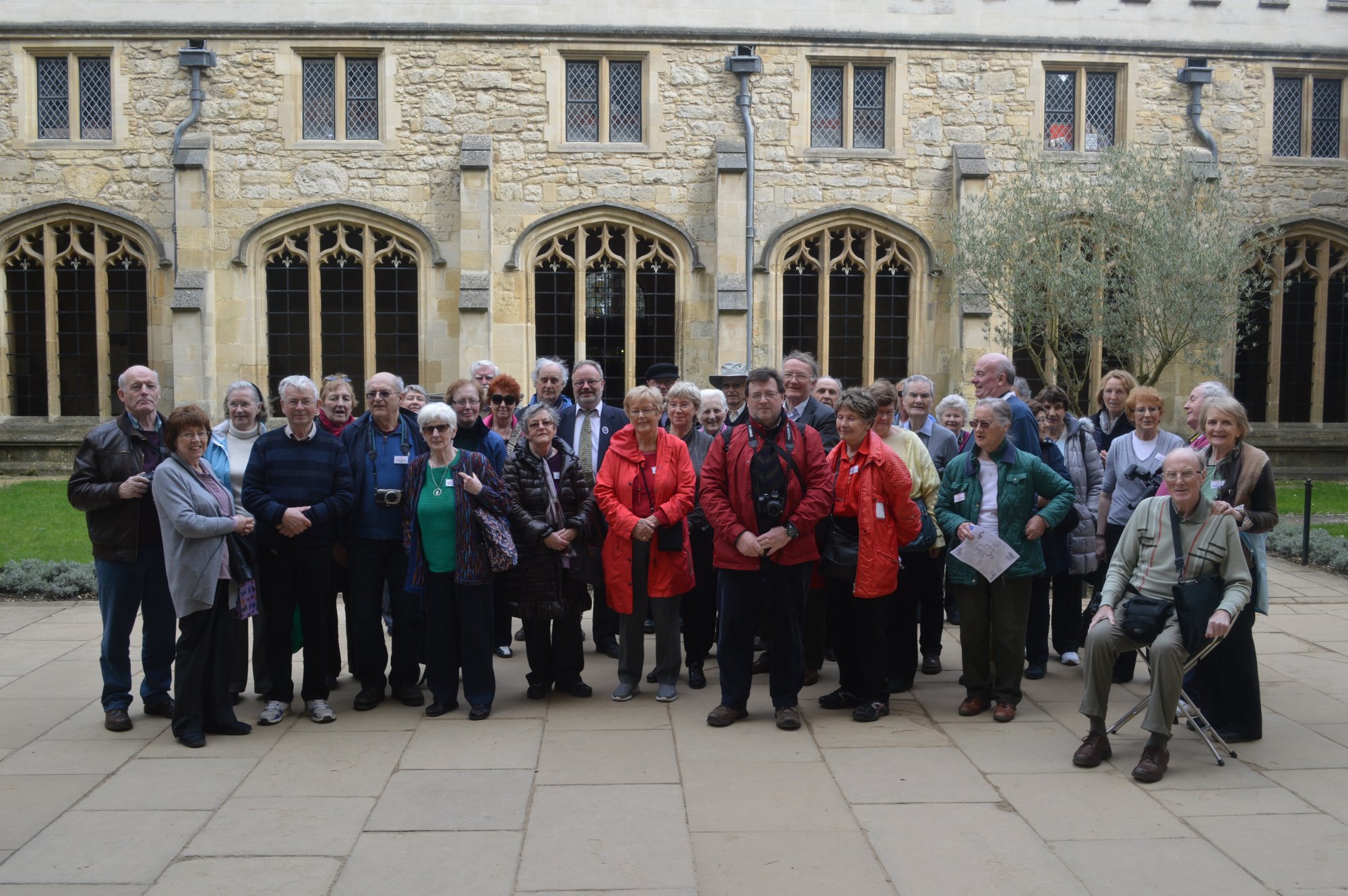 Sadly, after an early breakfast we bid farewell to the Angel Hotel, which had proved to be an excellent home for us with great facilities and service, and headed for Holyhead and our ferry back to the Emerald Isle.

This was another memorable visit to a beautiful and unique part of England’s heartland, one which we will all remember for the fond memories of the people and places we encountered on the way.