Report of April Trip to Bath

It was a very early start for most of our group not least of all George and Bridgeen Rutherford who had travelled from Derry in the early hours of Monday morning to join the group in Dublin. Such was the measure of the enthusiasm of the merry band of local historians who had travelled from all corners of the country to meet in Rosslare for what was to be a memorable journey to the south of England. We had a marvellous turnout with people from fifteen counties representing twenty four different Historical/Archaeological societies.

We had an eventful first day with the Fishguard ferry being cancelled, having to take the Irish Ferries boat to Pembroke instead and experienced some “rocking and rolling” on the crossing. However we managed to recover and after our journey through the Welsh country side we managed to reach our hotel in Bristol a little weary but safe and sound.

After breakfast on Tuesday morning we left early and picked up our guide, Alison Levy, in the beautiful city of Bath on our way into the ancient county of Wiltshire. This was our first glimpse of Bath and it was resplendent in the early morning sunshine making our planned visit to the city on Wednesday all the more exciting. We travelled south skirting along the Salisbury Plains, a unique landscape and not geographically unlike our own Curragh of Kildare. Like the Curragh, the area was and still is used by the army for manoeuvres and other military activities. Our guide pointed out some army barracks which had been significant during and after the war. Stonehenge was beckoning and we were not to be disappointed. This ancient monument is simple in design but sitting alone on the bleak plains is awe inspiring against the horizon and proved to be a special experience for all of us. The self guided tour was most informative and interesting. Even after 5000 years its true meaning is still a matter of conjecture – is it religious, an astronomical clock or a bronze age burial ground ? – you can take your pick. ! 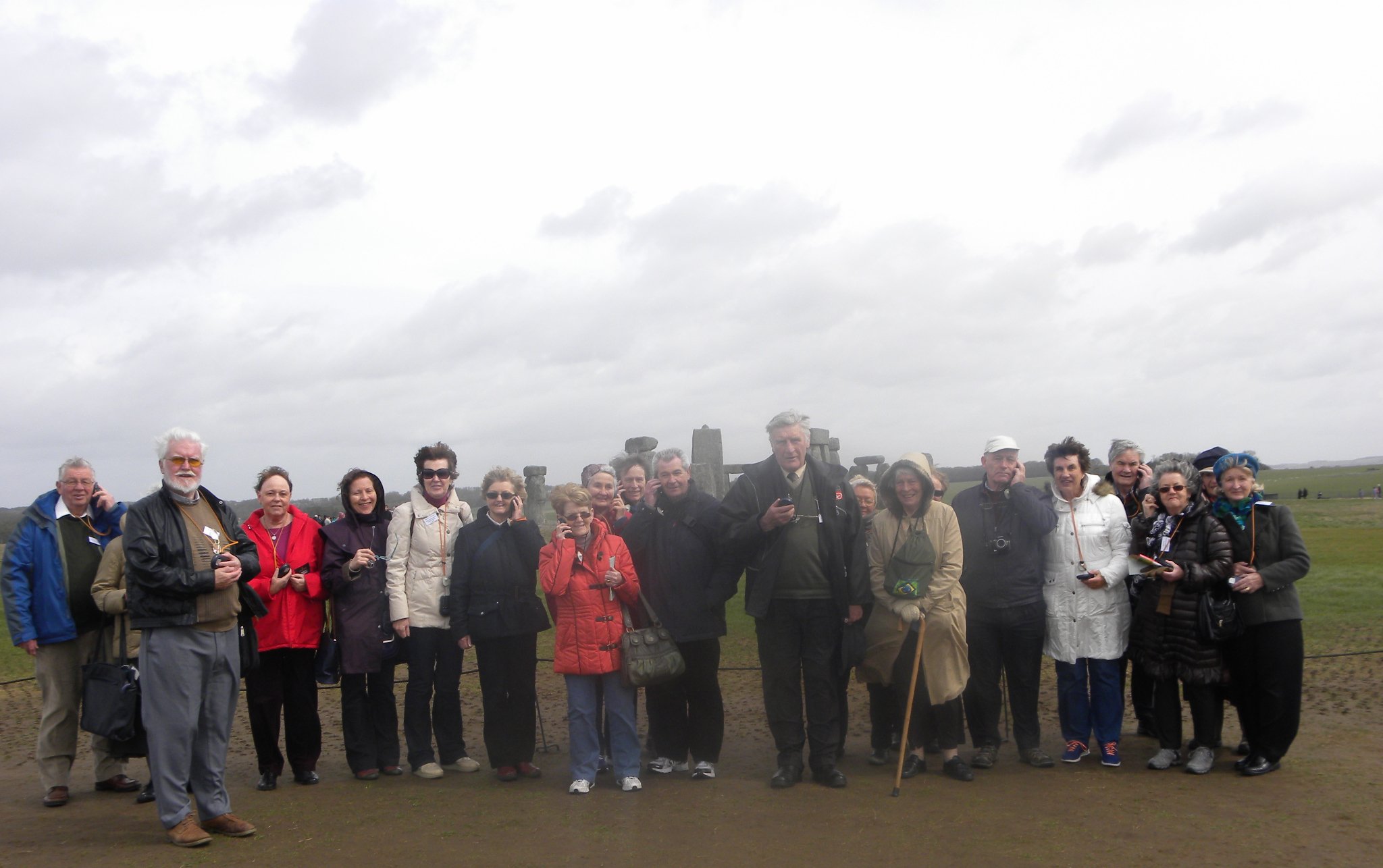 At Stonehenge
Then it was on to the mediaeval City of Salisbury passing “Old Sarum” which lies impressively just outside the city. The story goes that when deciding to build Salisbury Cathedral it was to be on the spot where an arrow would land after it had been released from “Old Sarum”. The arrow struck a white deer which struggled to the spot where the cathedral is now built. We then explored the area around the Cathedral called the “Close” and we were expertly guided by Alison around many of the interesting buildings and made familiar with their history and significance. It was exceptional to see so many different designs of buildings and the variety of architecture displayed. One building was the former home of British Prime Minister, Sir Edward Heath and we also saw his grave later in the Cathedral where he lies buried. Alison also showed us other interesting aspects of the city as we had a walk around. We then all dispersed for lunch and I have to say that I managed to stumble on a tasty local ale called “Badger’s Tangle Foot” which helped to “wet” my appetite. After lunch we all gravitated to the Cathedral for our guided tour. The Gothic Cathedral surrounded by the verdant green parkland presented a wonderful picture with its unique tall spire (the tallest in the U.K.) reaching up to the heavens. Built 800 years ago it presents an impressive vista inside and we were fortunate to have the services of some excellent guides. It is a place where the ancient meets the modern with the presence of the William Pye designed sculptured flowing water font. 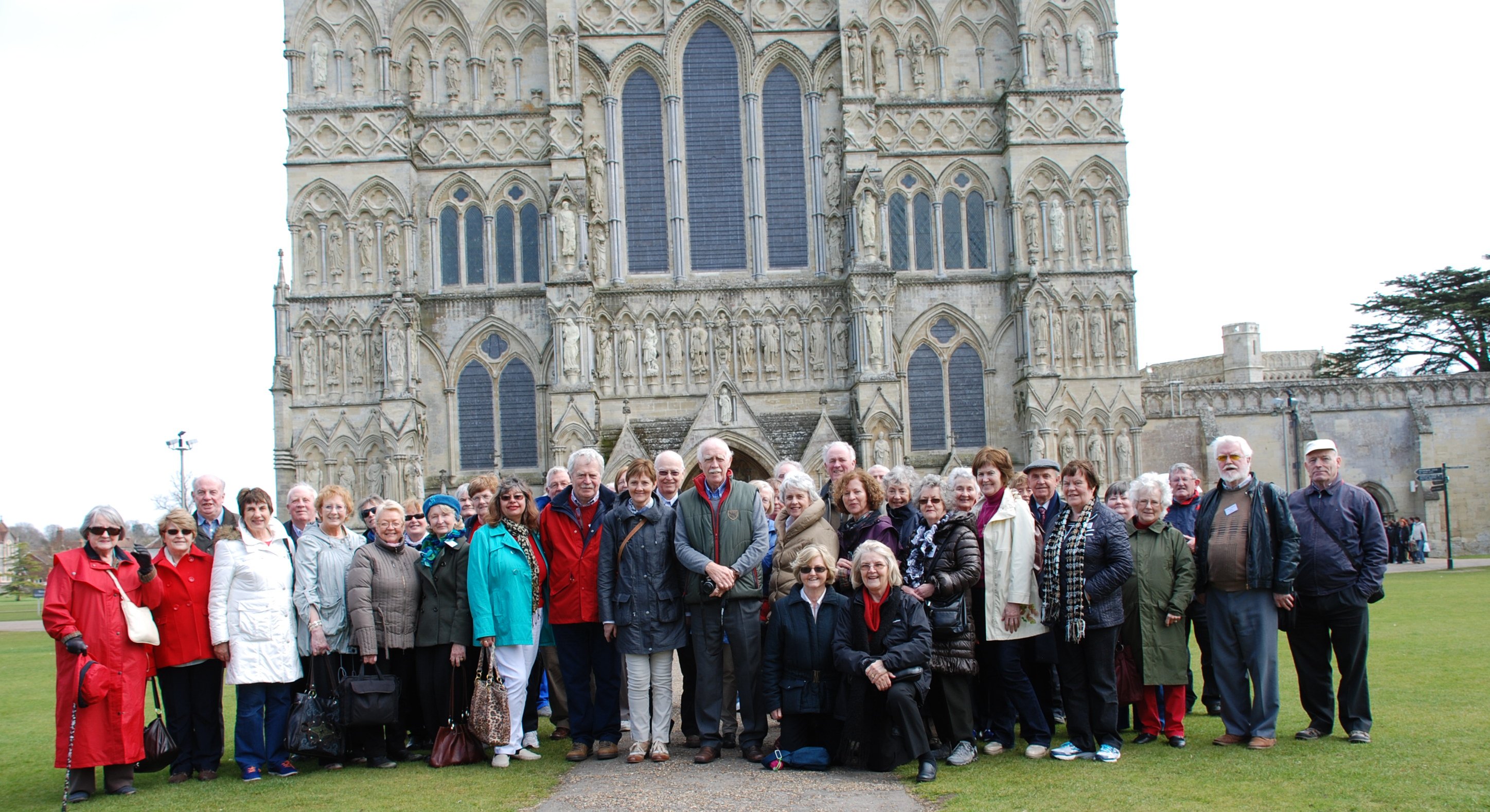 Outside Salisbury Cathedral
We managed to see the world’s oldest working clock and were privileged to view the best preserved copy of the Magna Carta housed in the astonishing Cathedral Chapter House. Again with the lovely weather the Cathedral and its cloisters presented a beautiful sight in the afternoon sunshine. After all that feast of architecture and history we spent the remaining hour or so exploring the remainder of the city centre. Reluctantly we finally left Salisbury for the comfort and safety of our temporary home in the Bristol Hotel.

Wednesday morning, we were all up bright and early with the exciting prospect of visiting Bath. We were met in the city by our two guides for the day, Val and Cheryl, who turned out to be a revelation in the best sense of the word. The guided walking tour of the city was excellent with our two guides not only showing their great depth of knowledge with regard to the city’s history but who delivered it with a passion, warmth and sincerity that touched all of us. On our travels around the Crescent, the Circus, the Roman Baths, Queen’s Square, the Assembly Rooms, Sally Lunns’, the Jane Austen Centre and much more we learned from Val and Cheryl so much about the social life and fabric of this unique city down through the ages. The morning concluded with a visit and guided tour of the famous Bath Abbey. Again accompanied by our excellent guides we learned of the history associated with this building which has been a site of Christian worship for over 1000 years. The imposing west front and its beautiful stained glass windows were a sight to behold. We then stopped for lunch after which all were let loose to explore what they could of this most beautiful city. An extraordinary feature of the city, which in fact Jane Austen herself did not like remarking it was too white, is the brightness of the stone in the buildings. It is a beautiful light cream and radiates a great colour and warmth when lighted by the sun shining on it. We all spent the afternoon exploring Bath in our own special way but regardless of what we did we all agreed it was indeed a unique and beautiful city.

Our plan on Thursday was essentially to explore the Southern Cotswolds but before we headed up north in that direction we took an opportunity to taste a little bit of the flavour of our adopted City of Bristol. Our guide from Tuesday, Alison, rejoined the group and gave us a most interesting walking tour of part of the City Centre around the floating harbour area. This also included some of the older streets and a visit to the Market House where we heard the story of how the saying “paying on the nail” came into use. Although now a modern European City it is also a historic port with a spectacular 1,000 year old history. Waiting for us alongside the Quay was our boat for the tour of Bristol Harbour which was appreciated by all. We had an excellent captain who elucidated eloquently on the history of the port through the years as we glided over the waters of the river Avon on our way around the harbour. We had the added excitement of having a harbour bridge opened especially to allow us further up river and much to the delight of all. On our way back to the quayside we were able to have some particularly stunning views of Brunel’s SS Great Britain as she sat in dry dock. This was the first great Steam Ship Ocean Liner and a tribute to the great engineer. As we headed north in the direction of the Cotswolds we were able to have a good view of another of Brunel’s engineering triumphs, the Bristol Suspension Bridge.

We now were heading into quintessential English Countryside as our destination was the little village of Tetbury. This Elizabethan market town was a little gem and the group enjoyed roaming around its quaint streets with the splendid pillared Market House in the centre and searching for lunch in one of its traditional Pubs or Ale Houses. A few others and myself managed to have a lovely lunch in the “Snooty Fox”. After lunch it was on the road again to visit Lacock Abbey. Here we had booked a self guided tour of the Abbey, a former Nunnery founded in 1232 with its Cloisters, Chapter House and Sacristy still in evidence. It was a fascinating place, not least the Tudor House that had been constructed within part of the Abbey and lived in until a few years ago. The tour through the older parts of the Abbey and the more recent Tudor House proved most interesting. It was here that the first photographic negative was discovered by Henry Talbot Fox and we managed to see the Fox Talbot Photographic Museum during our visit. Lacock Village, which is under the care of the National Trust, was another Gem. A beautiful little village that was the setting of Meryton in the BBC TV adaption of Jane Austen’s Pride and Prejudice. We then headed back to Bristol in the evening sunshine after another great day.

All good things must come to an end and on Friday morning bright and early we left Bristol to catch our ferry crossing at Fishguard. However our historical interludes were not finished yet and as we travelled back through the Welsh countryside we had two most interesting talks by two members of the group. Maire Downey told us all about the Bristol trade links with Ireland and Rose Love talked about the history and origins of the Celts.

As we said last year this was a wonderful trip which will not only be remembered for the wealth and variety of the history we encountered but by the warmth, friendship and hospitality of all the people in our group and also those we had the pleasure to meet on our memorable journey.