Report of joint photographic project with the National Library of Ireland

Have you ever thought how great it would be to walk along by the Liffey with your grandchild and to be able to say to them “I helped build that bridge”?

Well, a great bunch of volunteers has done something just like that and about which they will be able to brag to their grandchildren.

However, it is not bricks and cement or even steel. It is on the Web. And, it will still be useful in their grandchildren’s time. In fact, it will get better with age.

Way back in 1989, while we all still used film in our cameras and while the trouble in the North was still going on, the two federations listed above got together to plan a project which would directly involve local history societies in every county of Ireland.

The plan was to select representative pictures of every county and almost every town from the many thousands in the Lawrence collection held in the National Library of Ireland and have somebody locally re-take the picture from the same viewpoint, at what was then approximately 100 years since the original photograph.

We approached Dr. Patrica Donlon at the NLI. She, and the NLI, could not have been more helpful or enthusiastic. 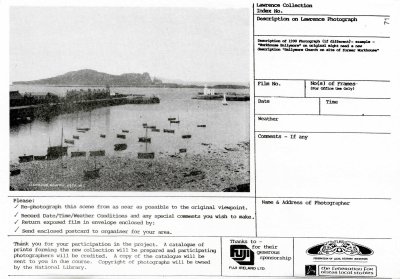 Fuji Ireland became our main sponsor by supplying and agreeing to process 100 rolls of film, and print 2400 colour 12X8 prints. A lot of work by all Ireland teams validated the picture choices, and spread the word amongst societies. In the course of time we sent out the films and a photocopy of the scenes, with instructions to take three exposures of each scene, As the films came back, we chose the best exposures and Fuji printed them. We made up the packages, which have resided in the NLI since then, each consisting of an original Lawrence print, an A4 card with a photocopy and all the relevant information, – date, time, photographer, neg. number etc. All this a massive piece of North/South co-operation whilst over the border turbulence reigned. There was one memorable day when we spread everything out on the large wooden floor of the new RTÉ studios in Dundalk and walked up and down through the collection as we sorted it.

Along with a wealth of stories about the old pictures and the adventures encountered in re-taking them were comments like “if W. Lawrence was here now, that’s not the picture he would take!” and, “We have better things in our town”. “Why did he not put in a little information about the subject of the photograph, or even the correct county?” There was also a general feeling that we could harness this new ‘photo – history-community’ surge of interest for a new project. 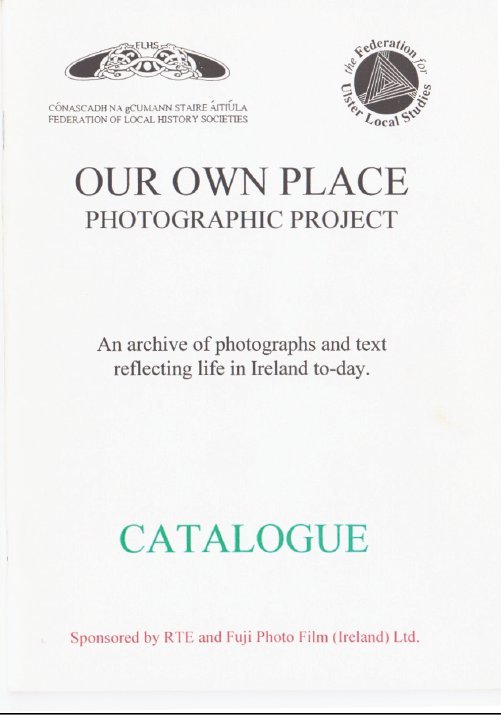 The two Federations put their respective heads together and came up with a project, which we called ‘Our Own Place’. For this, each group had twenty categories of picture ranging from the usual architectural scenes to ‘people at work’, ‘people at play’, houses, shops and many others. RTÉ financially supported this project, and we started work again.

Finally, we were in a position to lodge 800 cards, each with its own picture and text paragraph and containing all the relevant data, researcher, photographer, location etc., with the Belfast Museum, the NLI and our sponsor RTÉ.

Last year Liam Clare and I approached Colette O’Flaherty, Director of the NLI, about raising the profile of these collections in the NLI online catalogue. She proposed that our members might wish to engage in another great voluntary project. The Federations agreed and we started in February2012.

We recruited volunteers, including some historians, some friends, others just keen to become involved, some very amateur computer users and other very highly qualified computer and information experts. The NLI appointed Aoife O’Connell as our instructor and mentor. She prepared instruction packs; got us a work location in the Manuscript Reading Room, and liaised with the IT section, which provided five laptops. Finally, a little shakily, we started with every day’s work being error checked by Aoife and uploaded to the NLI website that evening

As March ended, ‘Our Own Place’ was completed. The physical materials were archive packed, labelled, and consigned to storage. The ‘Lawrence Photographic project’ required a little re-training and we were off again. The camaraderie in the groups was wonderful, and they all fell in love with always helpful, always patient Aoife. Somebody said, “It was great but it was like a retreat we couldn’t talk out loud.” The Lawrence project carried on through April finally finished at the end of that month. Our wonderful mentor from the NLI, Aoife O’Connell completed her contract with the Library around that time and was due to leave not only the NLI but to get married and start her new life in America.

We had to have a proper launch for the project and quickly, before the bride (to be) left. Thanks to the efforts of Orla Sweeny, Colette O Flaherty and others as well as the Joly Café, we had our launch in the elegant National Photographic Archive premises in Temple Bar. 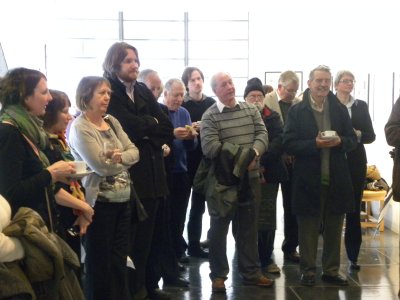 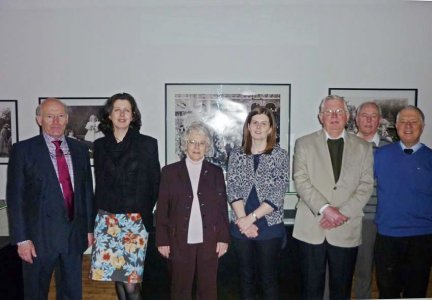 It was a great occasion when we could thank personally all the volunteers who made it all possible. We were all greatly pleased to have been part of such a successful endeavour. The Director of the NLI had a family crisis and could not make it at the last minute so Colette O’Flaherty Chief Herald of Ireland and Keeper of Collections of the NLI stepped into her place and spoke on behalf of the library. She thanked the volunteers and the two federations and hinted at other projects that might lie ahead for this great alliance of the federations of local history societies and the National Library. The Federation for Ulster Local Studies and the Federation of Local History societies were well represented, and of course, all the volunteers were present.

A number of others spoke and I got to present a kiss and a bouquet of flowers to Aoife who was greatly applauded by all present. 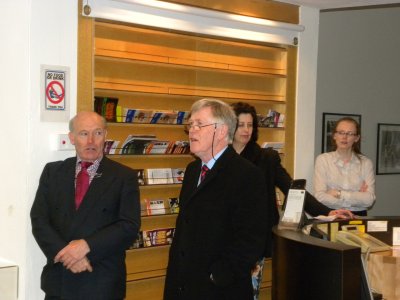 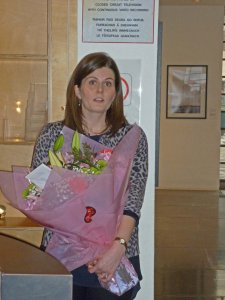 Still shaken by all this, and amid smiles all around, I reminded the library that even in these straitened times I would nag the library until all these pictures are scanned and put online as promised at the outset.

Then, we will have two great historically valuable resources available to researchers.

One could hardly thank all the volunteers enough for their commitment and work, often including long distance travelled each day.

In a time of some national gloom, they are shining stars.