Report of the Joint Federations Trip to the Titanic Centre

The 2012 joint exchange visit between the two federations saw a large group of almost eighty people meet in Belfast for the annual joint event. 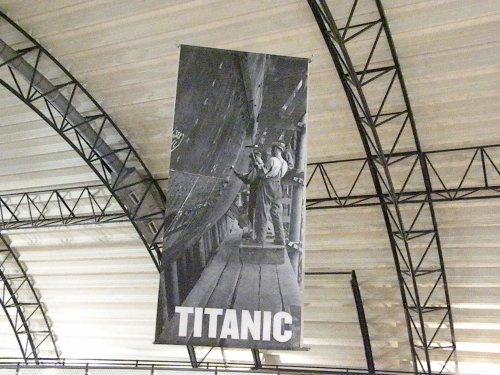 The first port of call was the Ulster Folk & Transport Museum at Cultra near Holywood in County Down where the intrepid travellers were greeted with a welcome “cuppa and scone” in the Midland Café. There then followed a guided tour of the museum’s TITANIC exhibition which was on display. It was truly remarkable to learn that housed in the exhibition are more than five hundred objects, many of them salvaged from the sea bed. We learned how the Titanic and her sister ships, the Olympic and the Britannic were built at the Harland & Wolff Shipyard. There were also many poignant stories recorded of people who had travelled on her and of their ultimate fate.

Next stop was just over the bridge and up to Ballycultra Town in the heart of the Folk Park but still within the museum’s grounds. It was interesting and informative to make the connection between the Titanic itself and what life was like for those living in and around Belfast in 1912. Ballycultra made this connection and presented a real feeling of how people lived and worked in those bygone days when the great ship was built. One such example was the “Riveter’s House” as it must be remembered that riveting played a major part in the construction of the liner. Doreen Mc Bride was able to relate a personal story about her grandfather, Sam Finlay, who was a cabinet maker and who worked on the fitting of the Titanic. The visitors also had time to stroll around the village and explore many unique buildings including the quaint old Picture House, McCusker’s Pub, Ballycultra Post Office and many other interesting buildings depicting life in that time. 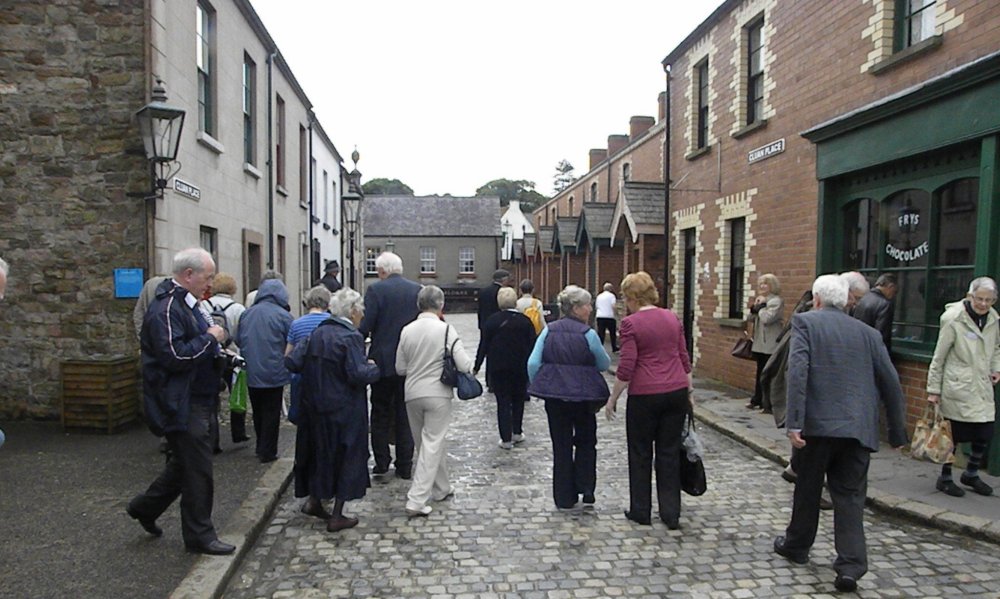 Ulster Folk and Transport Museum
Unfortunately we had to leave it all behind as it was time to eat and a visit to the Bobbin Café in the beautiful Belfast City Hall proved more that adequate. A very warm welcome awaited the group and all enjoyed excellent food, great service and a most friendly staff. After the meal there was time to explore the entrance hall and the corridors of this impressive building. The beautiful marble staircase, stained glass windows and paintings gave a taste of the ambience of the magnificent interior. 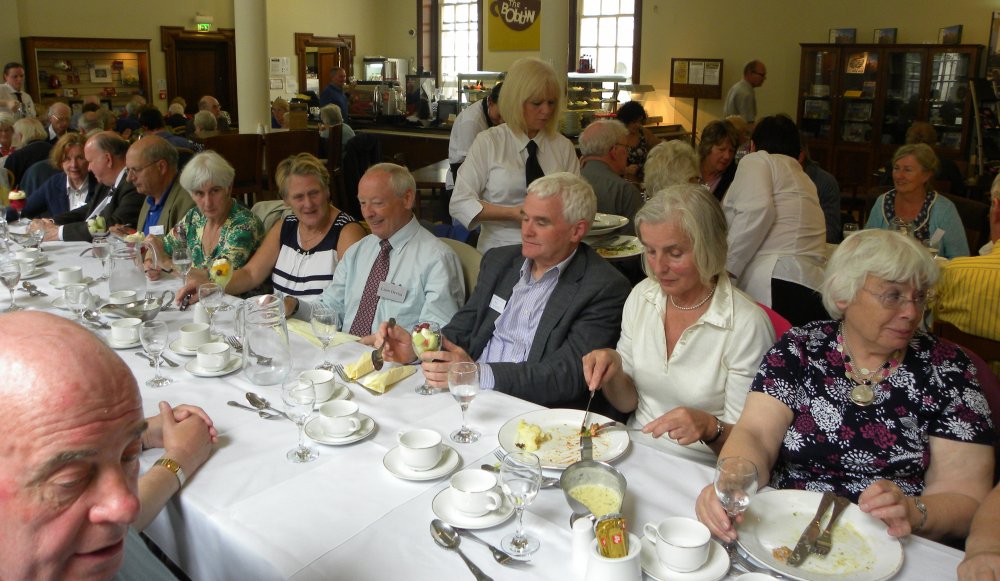 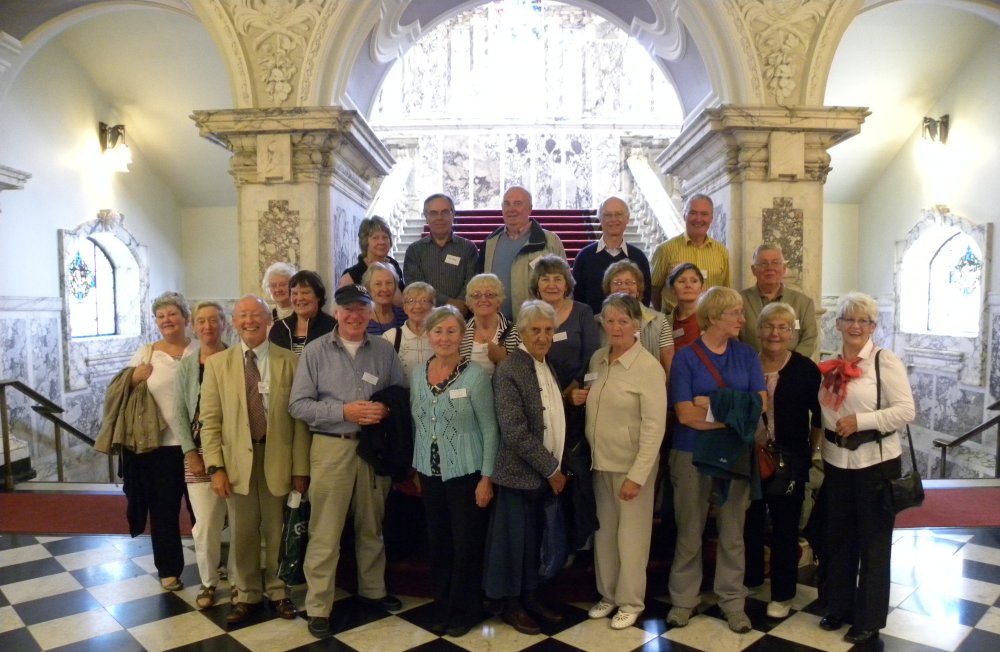 The Group at Belfast City Hall
It was now time to head for the Titanic Quarter and there was great anticipation and expectation for what lay ahead. I have to say that it was not before some excitement and concern about some missing people after the buses were stranded by a parade taking place unexpectantly around the City hall. However after the initial scare we did manage to arrive at our destination. The state of the art Visitor Centre was certainly no disappointment and all enjoyed the self guided tour immensely. The whole Titanic story from start to finish and told through interactive technology was fascinating. The thrilling shipyard ride was something special and an experience to be remembered. The Titanic Visitor Centre building was so impressive that only when viewed in real life and up close could one feel the impact of its distinctive architecture. Outside the building it was a somewhat eerie experience to walk along the line of the slipway where the Titanic was built. 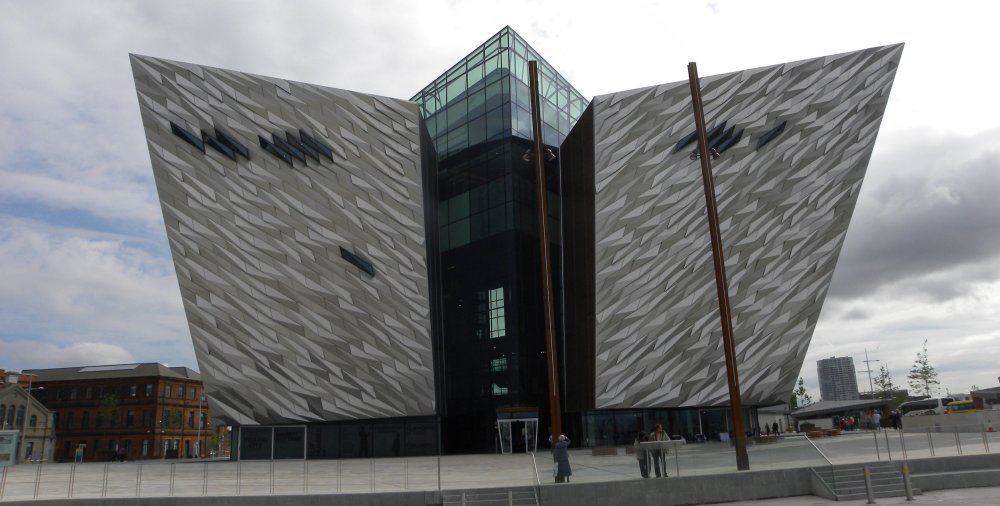 Group at the Tatanic Centre
Now it was time to see the Pump House and the Thompson dry dock. This area extended over seven acres and being the footprint of the Titanic gave some idea of the enormous size of the liner. The film show inside the Pump house brought to life the technology and innovation used at the time to build some of the world’s biggest ships. It was again something special to view the massive steel caisson gate and see first hand the original rivets still there after so many years. The Pump House building with its distinctive clock tower and the timber cappings lined along the bottom of the dock were all reminders of its historic past. 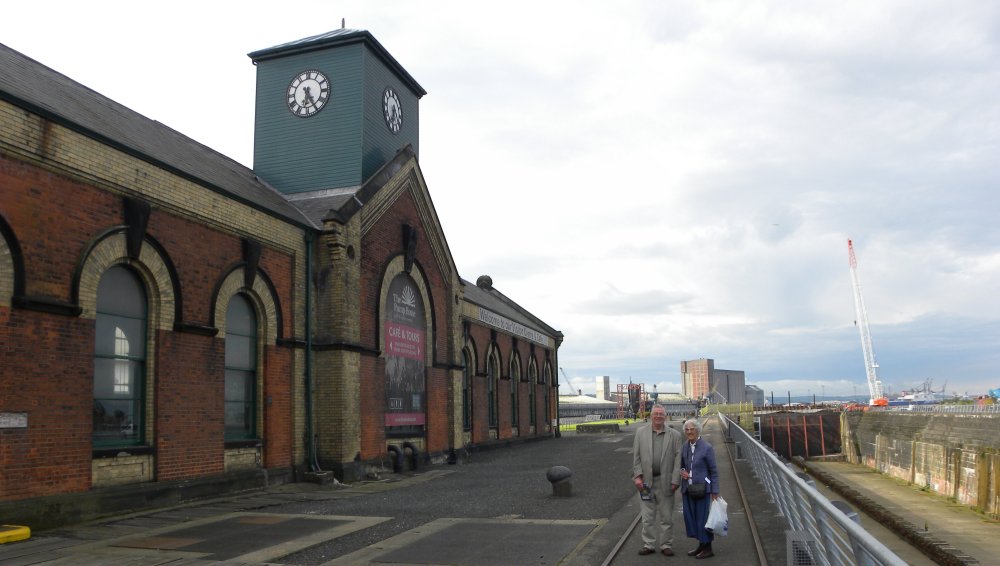 Pump House and Titanic Dry Dock
The day concluded in the evening sunshine with old friends and new saying “Au Revoir” after what was a memorable journey for all.
Click here For Doreen McBride’s photos of the trip
Categories: 2012, NewsJuly 9, 2012
Search
Go to Top