Report of the Joint Federations Trip to York

This year’s joint event took over fifty local historians from all over the country to the historic city of York and its hinterland. 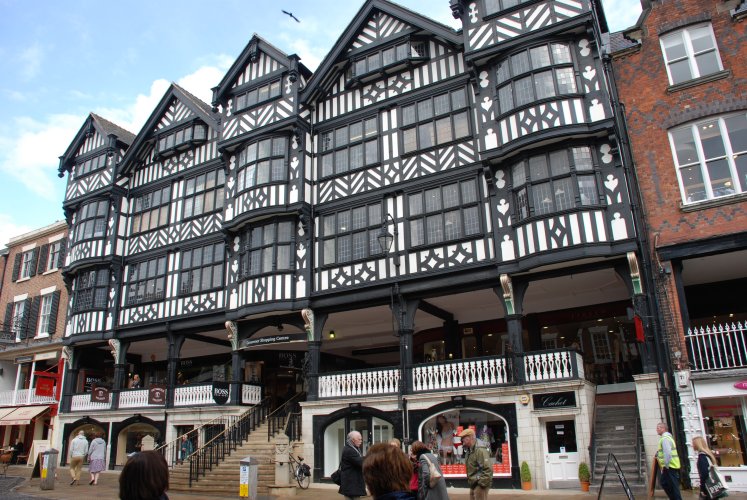 Travelling by coach and ferry the group made their way towards York with a stop off in the city of Chester in Cheshire. It was a relatively short stop but it did allow for the opportunity to see some of the city’s attractions. Chester is a walled city with a beautiful cathedral, the ruins of a Roman Amphitheatre and many fine, attractive buildings, many of which proved to be architectural gems.

The Hotel 53 in York, which was to be home for the week, was a welcome haven and after dinner and an early night the group were ready for the road next morning.

The merry band left the hotel early to catch the 9.00 am steam train from the picturesque market town of Pickering to the quaint town of Whitby on the east coast. The train journey through the North Yorkshire moors was a memorable one with stops at the beautiful rural stations of Levishem, Goathland and Grosmont. It was “Step on board and into another world” of beautiful steam engines, atmospheric little stations and smartly uniformed staff – all working voluntarily. The railway is both lovingly preserved and charmingly authentic.

Whitby was a beautiful seaside resort boasting an impressive harbour, high cliffs and 199 steps leading to the magnificent Whitby Abbey and St Mary’s unique decorative church, both overlooking the town. It was a delight to wander through the many picturesque little streets with their colourful and attractive shop fronts and windows brightening up the whole area. The town is renowned for its sea food and has arguably the “best” fish and chips in the world.

Whitby Abbey
No place in the world is without an Irish connection and none more so than Whitby. It was here that the Irish Novelist, Bram Stocker, wrote his famous novel, “Dracula”. He lived in Whitby for a number of years during which time he wrote the novel and it is reported that the idea for the novel came from a visit he made to the abbey. 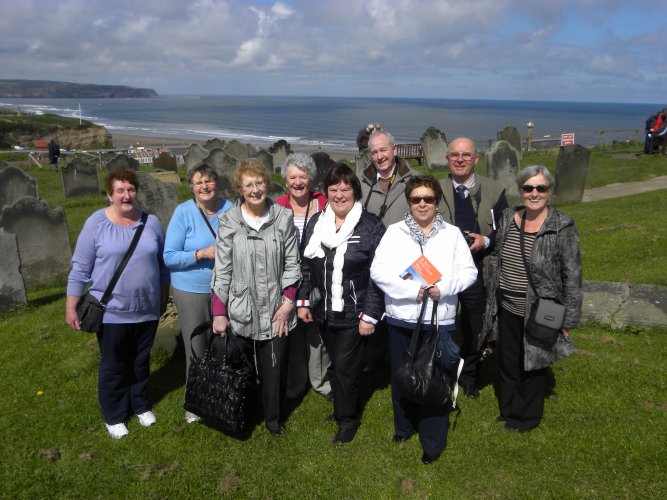 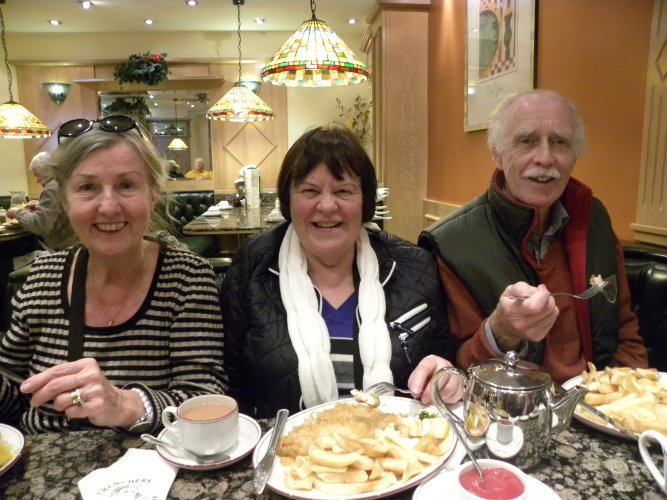 At St Mary’s Church and tucking into “the best fish and chips in the world”
Castle Howard, one of England’s finest houses, and nestling in the breathtaking Howardian Hills was the next stop. This magnificent 18th Century House was designed by Sir John Vanbrugh for the 3rd Earl of Carlisle. Today the Hon. Simon Howard and Mrs. Howard and their children Merlin and Octavia call Castle Howard their home. The house, with its magnificent gardens and surroundings, is full of world-renowned collections including frescos, furniture and paintings. A stunning vista was provided by beautifully adorned corridors, colourful bedrooms, exquisite libraries, spacious halls and the grand hall with its impressively decorated ceiling. 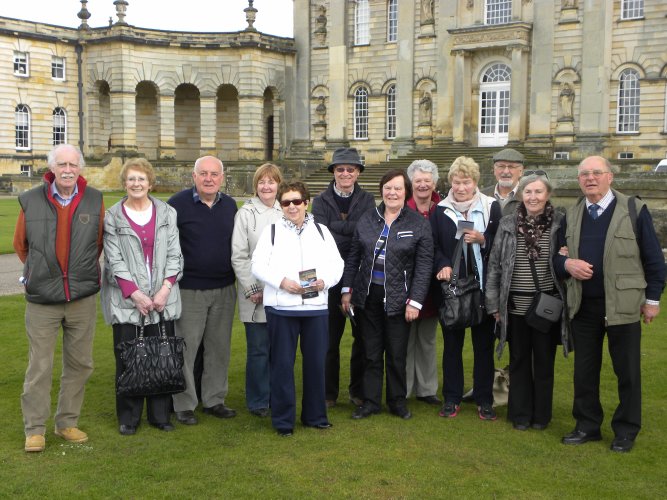 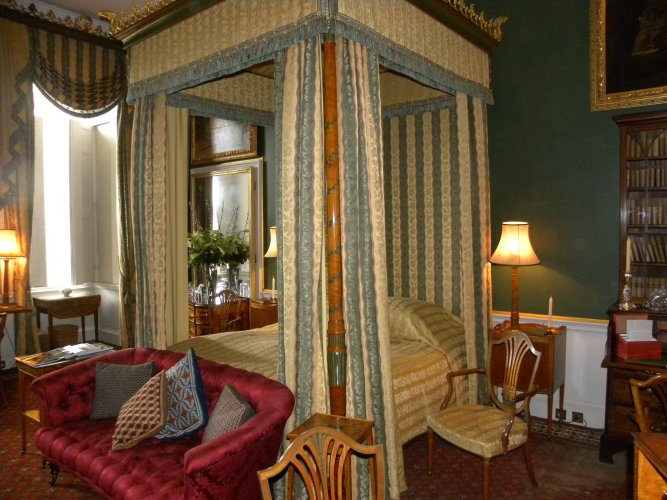 Wednesday was an opportunity to explore York and feel its varied and turbulent history. A walking tour of the city within the walls traced the evolution from ancient times through Roman, Viking, Anglo-Saxon and Tudor periods, and up to modern times. Many important and unique buildings were seen including Clifford’s Tower, York Castle, Fairfax House, Holy Trinity Church and a memorable walk along the “Shambles” to the Chapel of St. Margaret Clitherow, saint and martyr. 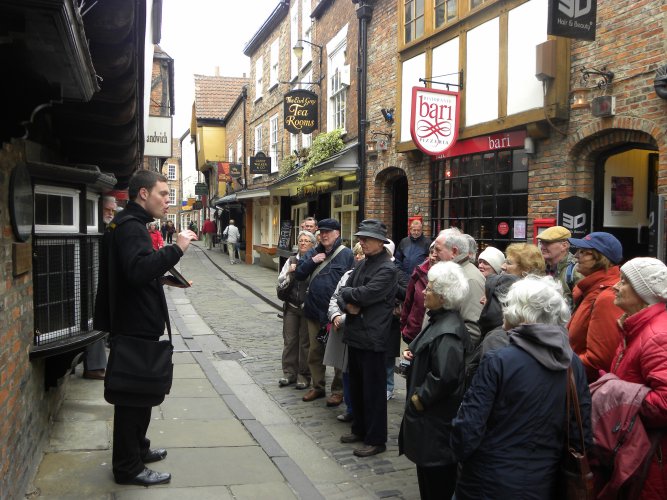 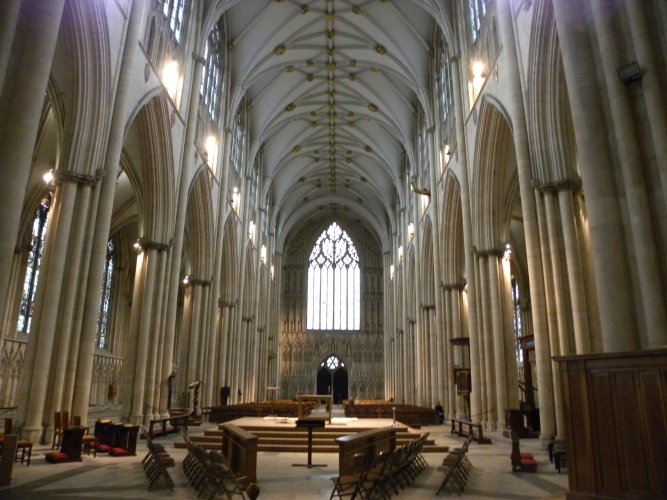 In the Shambles and York Minster
Next was the magnificent “Minster”, the largest Gothic Cathedral in Northern Europe. The Cathedral was awe inspiring in its sheer size and the beauty of its magnificent stained glass windows and decorative woodwork. Each section had its own distinctive style and included the nave, the central tower, the north/south transepts, the chapter house and the quire. The ceiling of the tower rises 197 feet overhead and the entrance to the quire has a magnificent screen of carved stone kings from William the Conqueror to Henry VI. The chapter house was remarkable with its wonderful range of carvings and its unique ornate ceiling.

People were free in the afternoon to choose what sights they would like to see and also decide how many of the many museums it might be possible to visit. Let us not forget the story of the legendary Highwayman Dick Turpin, whose grave is marked by a solitary headstone in a small graveyard within the city walls. 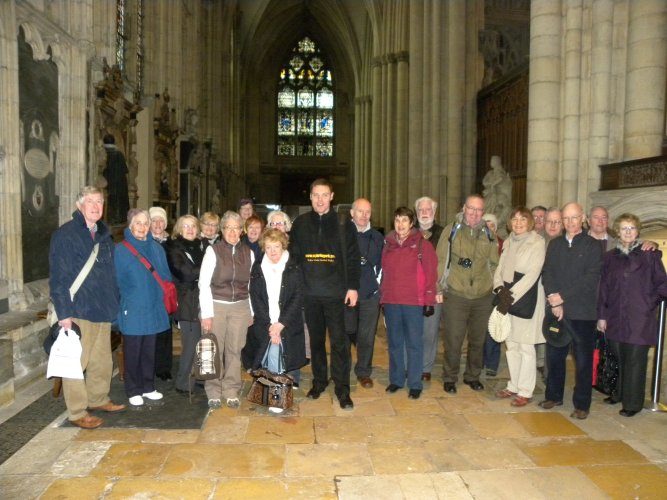 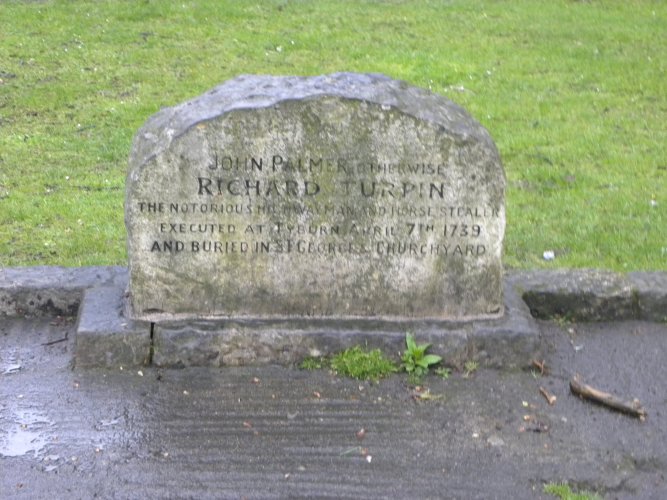 In York Minster and the memorial of Dick Turpin. [No sign of Black Bess]
Thursday

On Thursday the group travelled west to Haworth and the Bronte country. We were greeted by our hosts, Johnnie Briggs and Stephen Woods in the local Baptist Church with a welcome cup of tea. The tour started with a visit to the Parsonage, a Georgian building dating from 1779. It was here that the family lived between 1820 and 1861. It is now a museum with the rooms set out in Victorian manner and containing many items used by the family. It was a fascinating trip back in time to relive the life of this famous but tragic family. A visit to St Michael’s Church the resting place of all the family except one of the sisters, Ann, who had been buried in Scarborough, proved interesting as it also contained many items of interest such as Charlotte’s marriage certificate and church furniture which had been used during their lifetime. 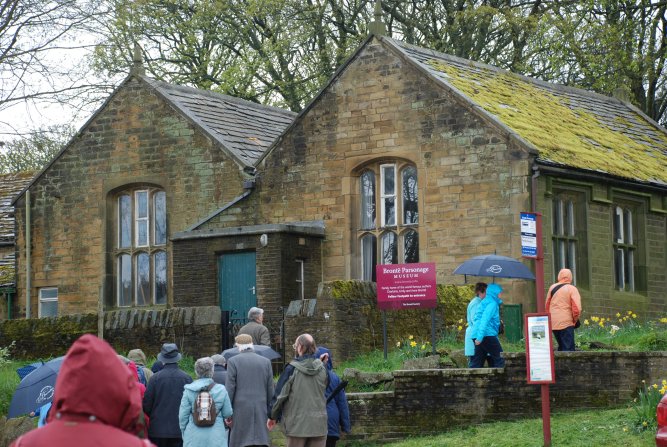 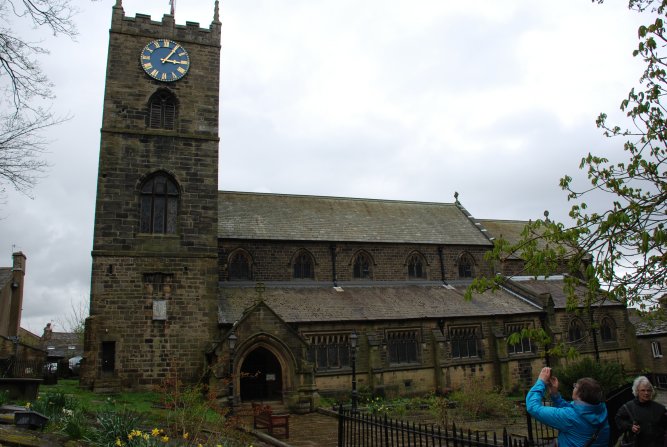 The Parsonage – now a museum and St Michael’s Church
It was something special to walk along the cobbled streets of the village, to taste its unique atmosphere and get that sense of being taken back in time with the Bronte family. The Black Bull, a favourite haunt of the wayward brother, Branwell; the Druggist Store, now a museum bookshop; the rows of quaint cottages in fine stone with slated roofs all painted a picture of what life must have been in this remote Yorkshire village. It was from this village that the Bronte sisters could see the moors that were to inspire them when writing their novels. The story o the Brontes is one of great sadness and isolation relieved only by the priceless legacy of works that to-day immortalise this talented tragic family. The highlight of the visit to Haworth was the wonderful warm welcome we received from our hosts and Bronte enthusiasts, Johnnie Briggs and Stephen Woods. 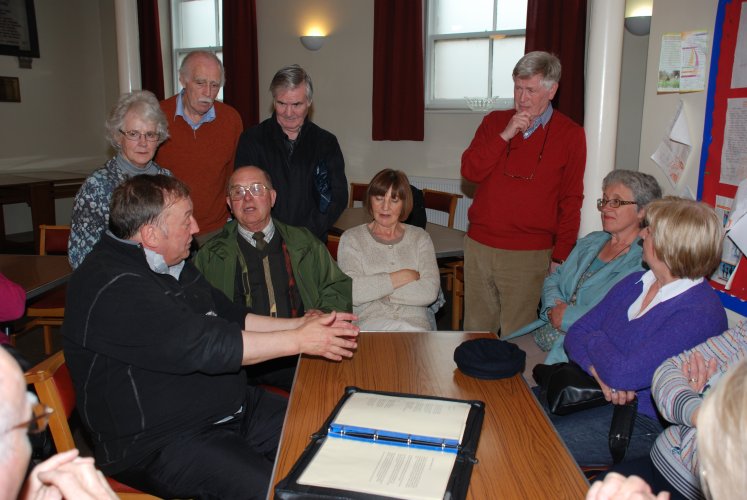 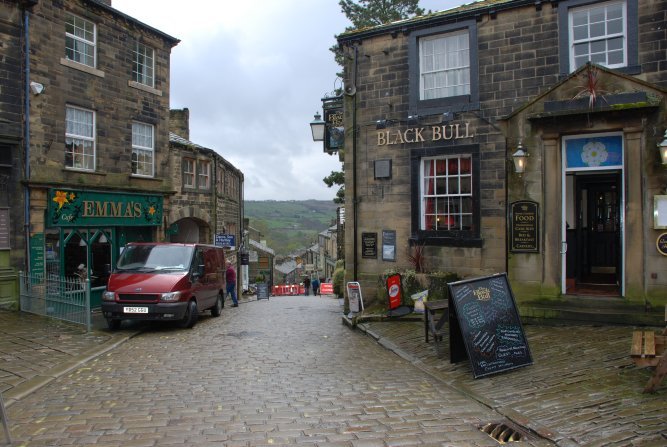 The Baptist Church Hall and The Black Bull Haworth
Johnnie Briggs spoke with a great passion and sincerity in telling the story of the Bronte’s. Ably assisted by Stephen Wood he brought us through the triumph and tragedy of this unique family as we walked the streets of Haworth together.

Lunch was served in the local Baptist Community Hall, courtesy of the local minister, Chris. It was delightful to taste the local fare of freshly made soup, quiche, lemon cake and tea/coffee. It was with reluctance that we had to leave the beautiful rolling countryside of Haworth after a visit to remember.

The final stop of the day was to visit the village of Saltaire, a model Victorian Village within the borough of Bradford. Now a UNESCO World Heritage Site, it was founded and built by Sir Titus Salt, a leading industrialist in the Yorkshire Woollen Industry. Revolutionary in its day, it provided neat stone cottages for the workers, wash houses with tap water, a hospital, an institute for recreation and education, a concert hall and many other facilities unheard of for workers of the day. We were met by costumed guides on arrival who had a wonderful collection of stories and anecdotes to tell and bring the story of Saltaire to life. The guides represented real characters of village life and we had the pleasure to meet, Mrs Caroline Hill, the Rev. David Cowan and the Matron Turner. 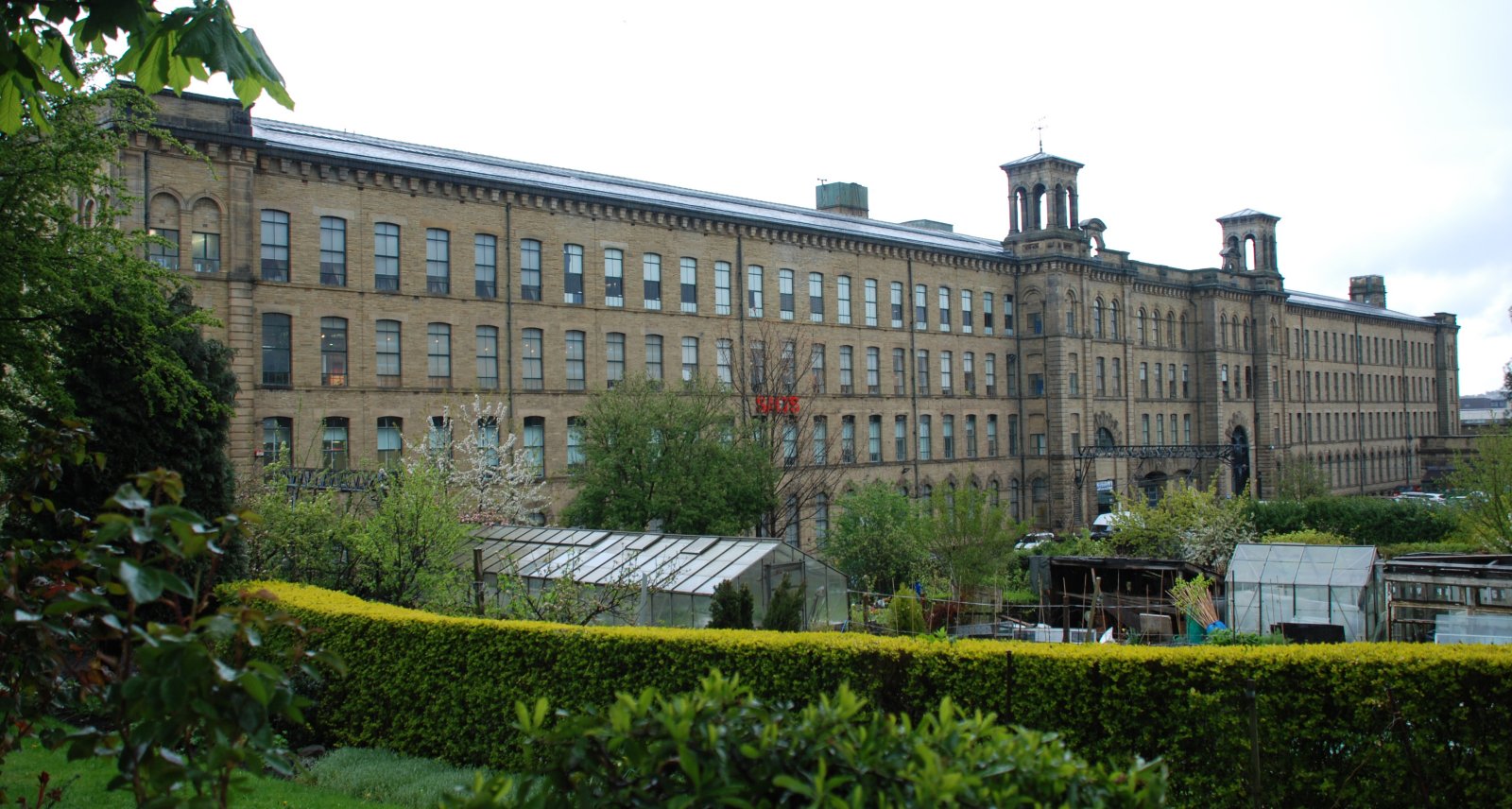 Saltaire
It was early to bed for most on Thursday night in preparation for the journey home on Friday.

Whilst on our way through Wales we made a final stop at the famous railway station with the longest name in the world: LLANEAIRPWLLGWYNGYLLGOGERYCHWYRNDROBWLLLLANTYSILIO-
GOGOGOCH. The Church of Mary in the hollow of the white hazel near the fierce whirlpool and the Church of Tysilio by the red cave.

A wonderful trip which will not only be remembered for the wealth of history we encountered but by the warmth and hospitality of the people we met on our journey.