A large group of almost one hundred local historians from the Federation for Ulster Local Studies and the Federation of Local History Societies enjoyed a memorable outing to Banbridge and district including the Bronte Country.

This event was part of the urban-experience project involving exchange visits between the two federations, north and south. Federation members travelled from the south to join up with their colleagues from Ulster at the impressive F.E. McWilliam Gallery on the outskirts of the town. F.E Mc William, a native of Banbridge, was a renowned surrealist sculptor. Adrian Howlett, chairman of the Banbridge History Society and committee member Doreen McBride welcomed the visitors on their arrival and presented them with a complimentary booklet compiled by Jason Diamond of the F.E. McWilliam Gallery which outlined the history of Banbridge and the surrounding area. 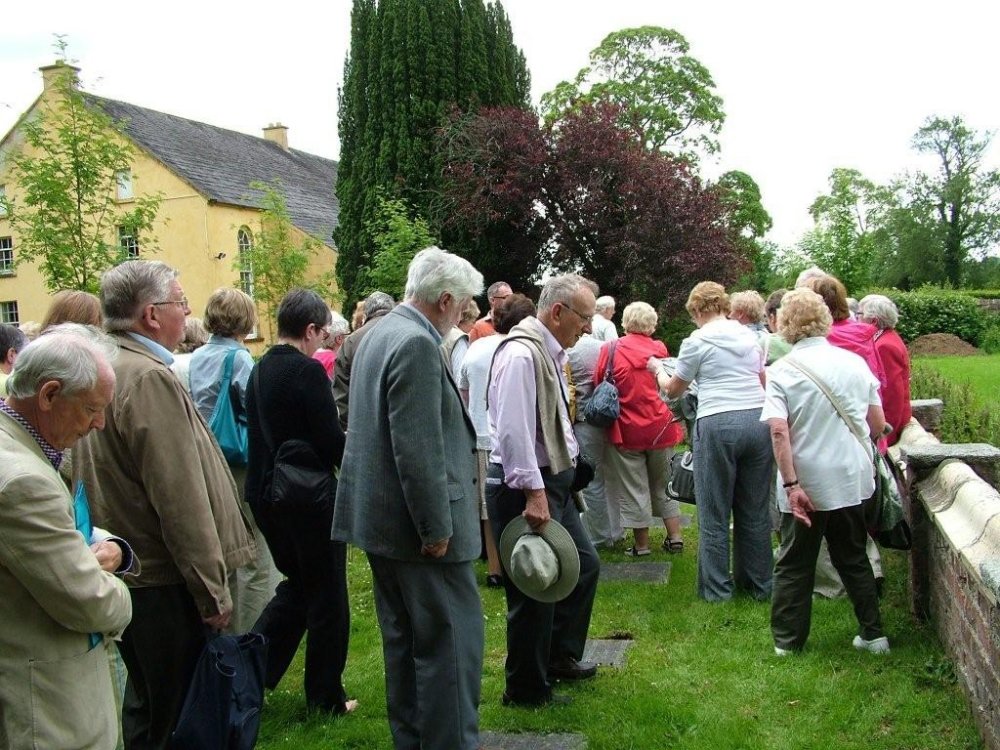 After mixing together into two buses the merry band set out on the first leg of the visit with a morning tour. Jason Diamond acted as guide on one bus and Doreen Mc Bride as guide on the other. Travelling through Banbridge the visitors were shown local landmarks including the Downshire Hotel, the Market House, the Downshire Bridge, the Cut and the statue of Captain F.R.M. Crozier, polar explorer who is credited with the discovery of the North West passage.

The first stop was at the Moyallon Quaker Meeting House near Gilford. It proved to be a most tranquil, peaceful and quiet place, chosen originally for its fertile surroundings and proximity to the Upper Bann. It was interesting to hear the history of Quaker families like the Christies, the Wakefields and the Richardsons and how they lived and related to the community in which they lived. 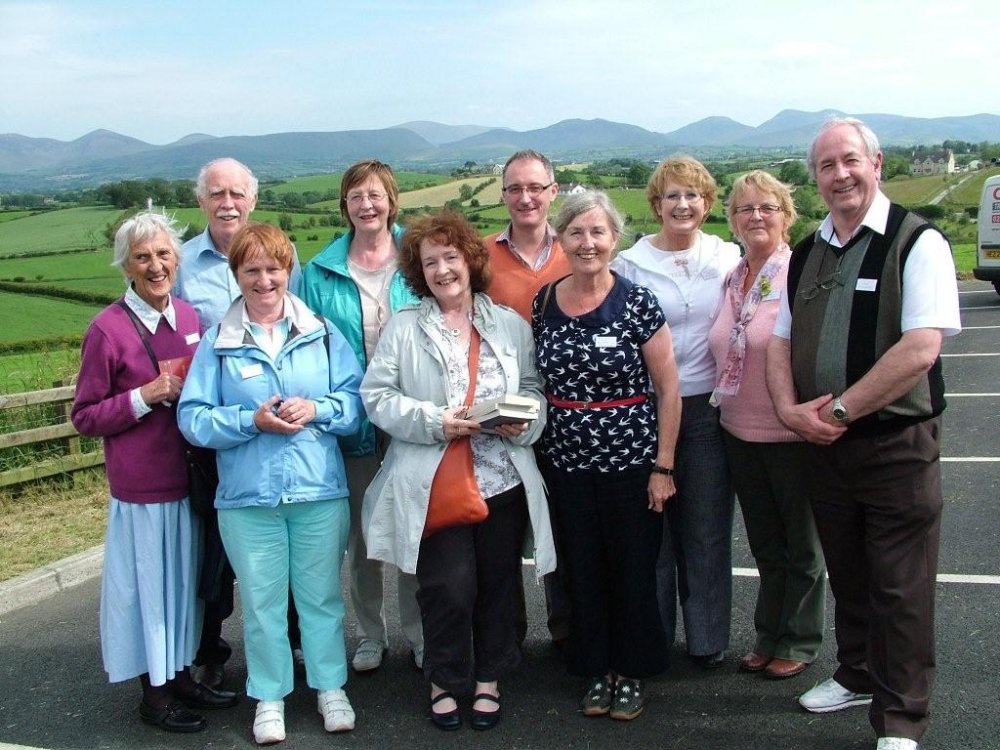 The next stop was St. John’s RC Church in Gilford. A small but beautiful little building ornately decorated inside. It had however a few very special and unique features that would surprise and delight any visitor. It boasted two fine Harry Clarke stained glass windows on both side walls adjacent to the altar. They provided a sparkling vista in the summer sunlight.

During the morning journey many interesting landmarks were pointed out and seen along the way. There were many reminders of the industrial past associated with the area – the linen trade. By 1772 it had become the principal linen producing district in Ireland with a total of twenty six bleaching greens along the Bann. Many fine houses were seen all associated with the local Linen Barons of the time including Milltown House, Banford House, Mount Pleasant House and Gilford Castle built for Benjamin Dickson of Gilford Mills. There were many fine Mills in the area but none more impressive than Gilford Mills still resplendent in all its former glory with its beautiful red brick and towering chimney. One of the largest flex spinning factories in Ireland this great threadworks was once the largest undertaking on the Upper Bann. 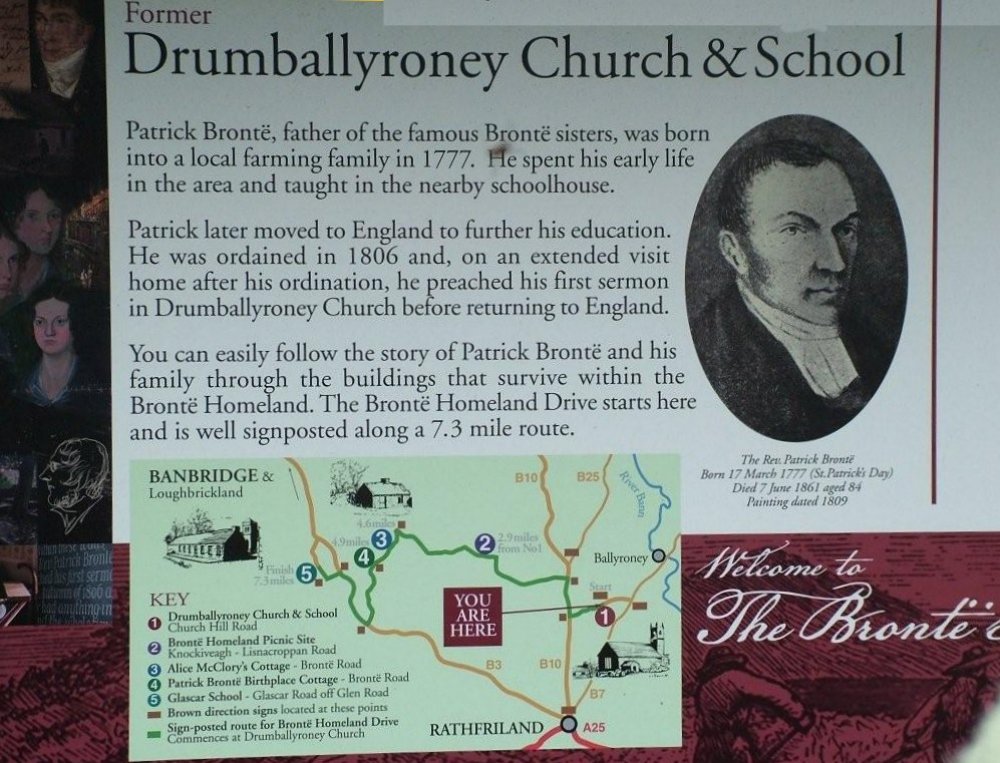 After the morning exertions a splendid dinner was provided at the Belmont Hotel accompanied by some excellent service. The afternoon saw the group on the road again to visit the Bronte Interpretative Centre at Drumballyroney. It was quite a sight to see the church, the graveyard and the little school sitting so picturesquely against the beautiful background of the Mourne Mountains. Packed into the little church there was a compelling presentation given on the Bronte family and its Irish connections. 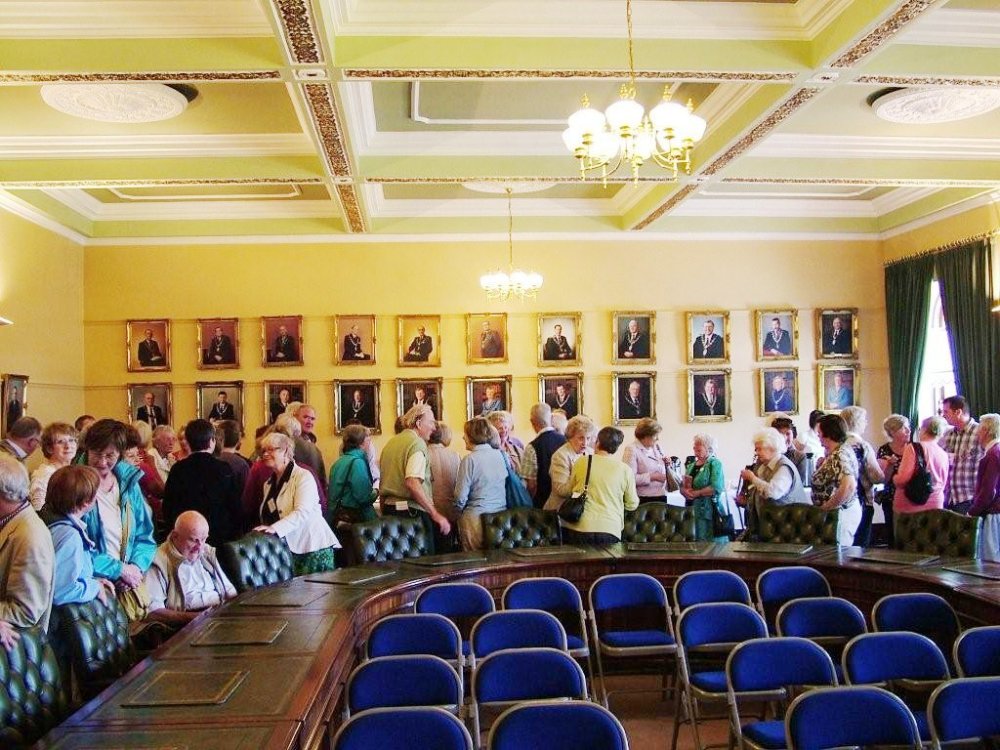 Following this people were allowed time to explore and enjoy the quaint little graveyard and the old schoolhouse. The journey back to Banbridge was along pleasant country roads with wonderful views of the green rolling drumlin countryside on all sides. This with the Mourne Mountains in the distance was something special for everyone. The final call was to Banbridge Town Hall where Cllr. Ian Burns of Banbridge Town Council treated the visitors to a civic reception in the Council Chamber. A splendid array of refreshments was provided and a very warm welcome extended to the visitors by Cllr. Burns on behalf of the town council. This was very much appreciated by the group and special thanks were extended to Cllr. Burns.

Adrian Howlett, chairman of the Banbridge History Society, Larry Breen FULS and Fr. Sean O’Doherty, President of the FULS all extended a special word of thanks to the main organisers Doreen Mc Bride and Jason Diamond for all their hard work.

The day ended with the reading of an appropriate little poem penned on the day by Mae Leonard from Naas, Co. Kildare. The poem was called; “Historical Friends”

Take my hand
And bide a while
To look into my eyes
And Smile.

So together, friend
I shake your hand
And say,
May we forever
Remain this way
Friends through History.

Horace Reid has compiled a slideshow of images from the event. To view, select the icon.