Report of the FLHS AGM in Kilmallock

The ancient town of Kilmallock, Co. Limerick was chosen as the location for the 2011 A.G.M. of the Federation. In this the 30th anniversary of the founding of the Federation it was decided to make it a weekend event, starting on Friday evening and ending on Sunday afternoon.

The Federation Chairman Larry Breen made contact with the Deebert House Hotel and Margaret of the hotel, with the help of some Kilmallock folk, organised a series of events to complement the A.G.M. which was scheduled for Saturday morning. On Friday evening Liam Irwin, Senior Lecturer Mary Immaculate College Limerick gave a most interesting talk on the history of Kilmallock. Illustrated with a PowerPoint presentation the talk whetted our curiosity for the following day’s historical walk of Kilmallock. 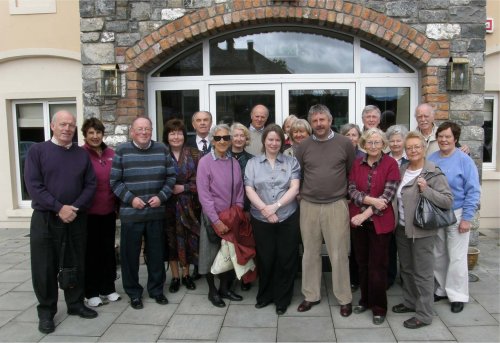 On Saturday morning the official business of the A.G.M. was gone through with the usual efficiency, ending with Society Spake which gave representatives of local history societies an opportunity to bring us up to date on the activities throughout the past year. It was delightful to hear of the happenings in local societies from Cork to Mayo to Drogheda to Dublin to Athy and localities in between. The interest in local history is very much on the increase and the divergent activities to be found in local history societies speak well of the scholarly interest now being taken in the subject.

In the afternoon there was a walking tour of Kilmallock visiting the very impressive Friars Gate Theatre, the small local museum and the enormous Dominican Friary which is the pride of Kilmallock. Next door to it is the Collegiate College which was also visited, as well as the Kings Castle, while the remaining town gates were viewed from a distance.

Following the town walk we returned to Deebert House Hotel where the members of the Kilmallock re-enactment group, attired in medieval warrior costumes, put on a display of medieval weapons, shields and mailed armour worn in battle. The talk and demonstration was very impressive and showed a knowledge of medieval uniform and weaponry which was breathtaking. 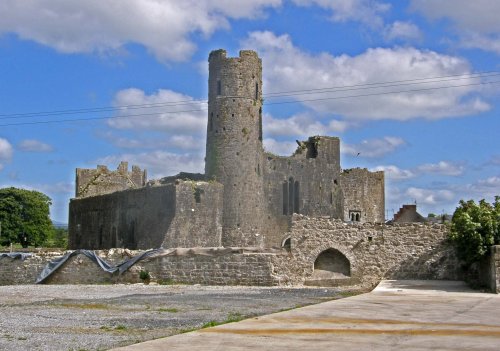 Saturday evening was rounded off with an Irish night in the Deebert House Hotel. Local musicians, singers and storytellers gave us a fascinating and continuous programme of music and song to which local history society delegates Kay Lonergan, Moira Laffan and Vera Hughes contributed. It was a wonderful night of entertainment.

On Sunday morning the delegates travelled by car to Lough Gur, there to be met by retired Garda George Finch who is a member of the Lough Gur Development Co-op and one of five tour guides involved with Lough Gur. For over three hours George brought us through the Lough Gur Archaeological site with a commentary on the hidden history of the area which was fascinating in its delivery and detail. It was perhaps one of the best guided tours we were ever privileged to have on a historical site. Well done to George Finch and his team, three of whom made surprise appearances at different stages of the Lough Gur tour.

The weekend came to a close at approximately 1.45 p.m. on Sunday when the delegates left for home, departing from the Lough Gur complex. It was a wonderful enjoyable weekend made possible by the kindness, thoughtfulness and good neighbourliness of all the Kilmallock folk who were involved in entertaining us over the weekend.