In a unique trip local historians representing the Federation for Ulster Local Studies and the Federation of Local History Societies joined forces in a visit to Belgium and the European Parliament. There has been a close relationship between the two federations for many years and a major objective has always been to promote interaction, sharing and co-operation at all levels in the organisations.

The visit to the Parliament had been arranged by Marie Quinn in the European Parliament office in Dublin through the Visits and Seminars unit of the European Directorate of Communications. A total of forty eight people, twenty four from the North and twenty four from the South made up the visiting group. The southern group were sponsored by Liam Aylward, MEP and the Ulster group by Jim Nicholson, MEP. The southern group of local historian was led by Larry Breen from Naas, Co Kildare, and the Ulster historians by John Dooher from Strabane, Co.Tyrone. There were participants from all over Ireland with representation from Counties Kildare, Laois, Kilkenny, Dublin, Westmeath, Mayo, Louth, Derry, Fermanagh, Antrim, Down and Tyrone.

The three day intensive programme experienced by the group had been organised by the Institute for Ireland in Europe, more commonly referred to as “The Irish College” whose headquarters are in Leuven. This was co-ordinated through the current director general of the Institute, Caroline Nash, ably assisted by the previous director Malachy Vallely who continues to work on special projects in the college. 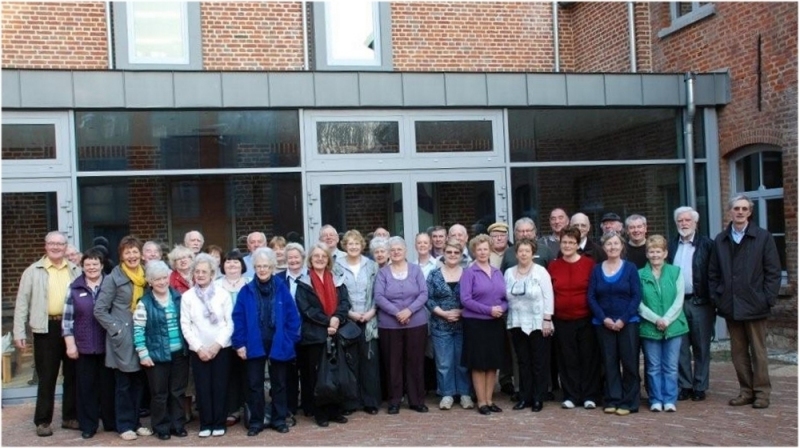 Group at the Irish College, Leuven
The group take the opportunity to thank the Institute for the trojan work they did to make the visit such a success and special thanks to the Irish staff of Niamh Kavanagh, Laura Whelan and Raymond Walsh.

The College, situated in the beautiful University town of Leuven, was home for the visitors during their stay and had itself played a role in the course of Irish history. At the instigation of King Philip III of Spain, the college was established as the Irish Franciscan College of St. Francis of Padua in 1607. The founder Florence Conry (1560-1629) was a man of many parts whose influence on Irish affairs extended throughout Europe.

That year heralded another key event in Irish History, namely the Flight of the Earls, in which Leuven played a part. The college provided a temporary home for Hugh O’Neill and Rory O’Donnell on their way to Rome. It also formed a crucial chapter in the intellectual history of Ireland. A colossal programme of collecting material relating to the history of Ireland resulted in the “Annals of the Four Masters”, a history of Ireland from the biblical flood to 1616 AD. The first printed text used in Ireland was developed in the college and the first Irish dictionary and grammar were published there also.

The Institute currently engages in a wide range of educational activities across Europe. A key factor in its activities has been the facilitating role it has played in North/South relations and it maintains equally good relations with Dublin as it does with Belfast. An important part of its work is to serve as a bridge between the two.

On arrival at the College the group were treated to a welcome cup of tea/coffee and then given an overview of the Institute by Malachy Vallely. Malachy traced the history of the establishment from its beginnings as a Franciscan Monastery through its varied history to its present day use as an important educational link between Ireland and the rest of Europe. 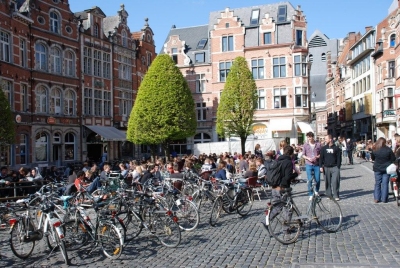 After lunch the visitors enjoyed a guided walking tour of the town with its many historical highlights. With the demise of its flourishing cloth trade, Leuven had resurgence with the university founded in 1425. The tour included the finely sculptured Town Hall and St. Peter’s Church with its magnificent interior in which hangs the famous “Last Supper” by Dirk Bouts, both being examples of flamboyant Gothic Architecture at its best. Also visited were the Cloth Hall, many other churches, the 13th Century “Beguinage” complex with its cobbled streets and fascinating 17th Century houses.

The Baroque style abounds in Leuven from St. Michael’s Church to the unrivalled stucco of Park Abbey. An interesting church in the town, St-Antoninskapel, Sanctuary of St Joseph, contains the mortal remains of the Leper Priest, Fr. Damian who is remembered for his heroic work with the lepers on the island of Molokai. 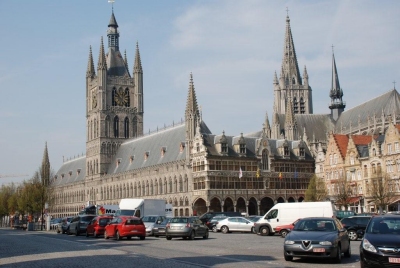 On Tuesday, 13th April the group headed to West Flanders to visit the battlefields of the Great War 1914-18. The first stop was the ancient town of Ypres (Ieper), the scene of some of the bloodiest fighting in Belgium. As one stood in the main square and surveyed the ornate buildings around it, it was hard to believe that the whole area was razed to the ground during the war and completely rebuilt.

Led by an excellent guide, Raoul, the group visited the Gigantic Cloth hall overlooking the Market Square. The building in the past was used as a covered market hall for the Town’s famous cloth on which the success of the city’s economy was based. The Cloth hall houses inside the “Flanders Fields Museum”. St Martins Cathedral, destroyed during the war, was a magnificent sight and more than justified its rebuilding in its original medieval style. 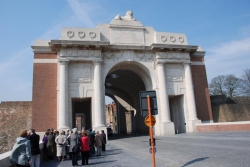 A visit to the Menin Gate, rebuilt as a British War memorial, was a must see and did not disappoint the visitors. Rebuilt in 1923-27 in neoclassical style it contains under the roof and against the walls of the monument the names of 54,986 British and Commonwealth soldiers. It was then time to visit the cemeteries that surround the Town.

In the Ieper area there are numerous war cemeteries from different nations. A large number are British. One of the largest and most impressive is the Tyne Cot cemetery and the biggest WW II cemetery in the world. It was a sad but special moment to stand and see so many white headstones circle the huge graveyard. The cemetery is situated to the south of the village of Passendale, the scene of one of the major battles in the area. A unique feature is the “Cross of Sacrifice” that was erected above a German Bunker that was taken by the Allies in 1917 with great loss of life. The most important German war cemetery is in the village of Vladslo, north of Ieper.

The group then visited Sanctuary Wood and a fascinating trip to Hill 62 to see the last remaining WWI trenches left as they were over ninety years ago. It was here that Canadian soldiers held out against the German onslaught. The area is full of old gas bombs, shells and all sorts of WW I materials used in the battle. Nearby is the memorial to the Irish poet, Francis Ledwidge, killed aged 29 on the battlefield at Boesinghe on July 31st 1917 while serving with the Battalion of the Irish Regiment the Royal Inniskilling Fusiliers.

The last port of call before heading back to Ieper was to see the “Island of Irish Peace Park” at Messines. This tranquil and peaceful park is dominated by an Irish Round Tower built with stone taken from an old disused workhouse back in Ireland. The memorial site is dedicated to the soldiers of Ireland of all political and religious beliefs, who died, were wounded or missing in the great war. Irishmen and women served with the armies of Australia, Britain, Canada, New Zealand, South Africa and the US.

After dinner the day ended with a return to the Menin gate to hear the “Last Post and Reveille”. Every night at 8.00 pm a moving ceremony takes place when members of the local Fire Brigade sound the last post at the gate. With the exception of the four years of German occupation during WWII the ceremony has been taken place every night since 1929. 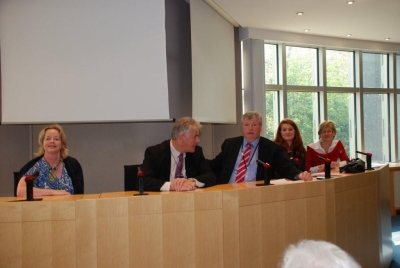 Wednesday, 14th April was another special occasion with a journey to Brussels and a visit to the European Parliament. The group were welcomed on arrival by Gergely Polner, a member of the Parliament staff, who gave a very interesting and informative presentation on the workings of the European Parliament. This encouraged many interesting questions from the visitors. Following this the group were welcomed by their sponsors namely Liam Aylward MEP and Jim Nicholson MEP. Also present to add their welcome were two other Irish MEP’s, Nessa Childers and Mairead McGuinness.

The Irish group were then privileged to be invited to a special memorial service to remember the Polish diplomats and their colleagues who had died in the tragic air crash. It was a sad, poignant and historic moment for the group to share in the grief of the Polish people.

Group at the European Parliament
Leaving the Parliament the group were on their way to see the Medieval City of Bruges. The City proved to be a real gem and captivated all concerned. An unspoilt town, with winding streets, picturesque canals, magnificent churches and many fine buildings. A guided tour of the town proved most interesting and informative by an excellent guide named Benedict. Afterwards some people chose to see the town by boat, some by bus, some by horse drawn carriage and others by foot. Whatever the mode of transport all were overwhelmed by its charm and beauty.

One interesting Irish connection is the story of “The Mantle of St. Bridget”. This relic of great antiquity is to be found preserved in the Cathedral of St.Sauveur. The cloth is reputed to be part of St. Bridget’s Cloak and was given to the city by Princess Gunhild, a sister of King Harold of England, after she took refuge there in 1066. A truly fascinating story and a must for any Irish visitor to Bruges.

That should have been the final chapter in a memorable trip by the two federations but another story was about to unfold. Next day the European airspace was closed as a result of the volcanic eruption in Iceland and the group found themselves stranded. It was at this critical stage that the “Irish College” came to the rescue and welcomed the group back to the Institute. It would have been unimaginable what the stranded group would have done without the help and hospitality of the college and the staff. The group owe a great debt of gratitude to all at the Irish College for all their care and attention during what was a worrying time.

However it is an ill wind that does not blow some good and this was no exception. The weather turned out to be good and the extra days allowed the historians to further explore Leuven and visit Brussels, Ghent, Bruges and Antwerp.

In the face of adversity great camaraderie developed between everybody. This allowed members from both north and south of the border to really get to know each other and many long-lasting friendships were formed.