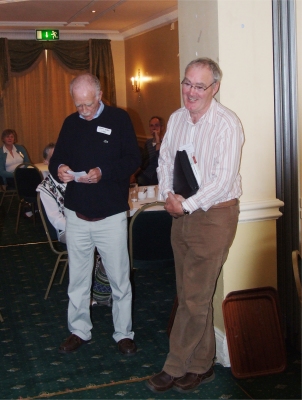 Introduction
After a pretty horrible summer, it was great boost to morale for the ‘combined forces’ of the Federation for Ulster Local Studies and the Federation of Local History Societies, who descended on the Hill of Tara, to encounter a clear, bright and warm, not to say ‘brilliant’ late summer’s day. The air was gin-clear and from the Forrad (The Royal Seat), within the Rath na Ri (The Fort of the Kings), the plains of Royal Meath and the Central Plain stretched away clear to the west, with only the earth’s curvature preventing a view of the Connemara mountains.

This was the first joint north/south event to be held for many years, and was the result of the re-establishment of relationship between the Federations earlier this year. In total the joint group numbered over 100, in roughly 50/50 proportions. Members came from as far away as Kinsale and Bellaghy – there was even one enthusiastic lady from Vancouver, on Canada’s Pacific coast. Given the distances involved, some had been up since 5:00am and would not be home much before 10:00pm. Needless to say everyone seemed to have thoroughly enjoyed the venues, the enthusiasm and detailed knowledge of the guides, the weather and the craic.

[This photo shows Larry Breen (left) and Johnny Dooher, Chairs of FLHS and FULS, welcoming the participants on the renewed joint events programme]

Tara
From the top of the Hill of Tara, although only 155m in height, the view is panoramic and breathtaking. In the northeast can be seen the Cooley and Mourne Mountains, to the west the Central Plain, to the southeast the Slieve Bloom Mountains and to the south lie Dublin and the Wicklow Mountains. It is said that fourteen of Ireland’s thirty two counties, comprising 20% of the country, are visible from here. On the hill there are over thirty visible monuments – some dating from the Neolithic period (4000 – 2400 B.C.). The latest dates from about 1000 A.D. There are numerous monuments in the surrounding countryside. The ugly scar of the controversial road being driven through the wider site was the only jarring note.

The group obviously did not have time to visit all of the monuments but the guided tour took in the Dumha na nGiall (The Mound of the Hostages) and the Forrad (The Royal Seat). The Forrad is believed to be a barrow or burial site from the late Bronze of early Iron Age. The standing stone is said to be the Lia Fail or Stone of Destiny, the inauguration stone of the Kings of Tara. Dumha na nGiall is the oldest of the visible structures. Built as a passage tomb, it was found to contain cremated remains from the Neolithic Age c.3000 B.C. During the Bronze Age (c. 2000 B.C.) cremated remains were buried in the earth mound. One of the burials was not cremated: that of an adolescent of about 15 with a necklace of jet, amber, bronze and glass beads.

After the guided tour there was an audio-visual display in the Church that had once served the local Church of Ireland community and now housing the Visitor’s Centre. The display dealt with Kingship in Gaelic Ireland and the processes and rituals involved in the inauguration of the Ard Ri.

After a welcome, and very tasty, lunch in the Conyngham Arms Hotel in Slane the party made its way to the Boyne Centre for the second event of the day. 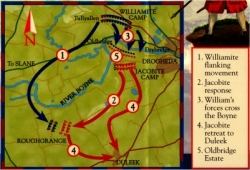 Boyne Centre
The newly opened Boyne Centre and the battlefield was bathed in glorious sunshine; indeed at one point on the battlefield I had to retire behind a building to get relief from the heat and glare. Once again the company was divided, half taking a guided tour of the battlefield and half visiting the audio-visual display in the Centre. An interesting feature of the terrain was that it was never developed and remains essentially as it was on 1 July 1690 when the battle was fought. The audio visual display consisted of paintings and artefacts and an unusual automated display of the battle itself (which you can see in static form in the graphic on the left) played out on a contoured surface with coloured moving squares and arrows representing the opposing army formations, movements and cavalry manouveres. It made the development and outcome of the battle come to life.

An interesting fact to emerge from the presentations was that of the 65,000 men in the opposing armies, ‘only’ 1,500 were killed. Also, it appears that their burial place has never been identified.

Conclusion
This was my first visit to either of the sites and I’m only sorry that I didn’t take the trouble to come much sooner. On the other hand had I come sooner I could not have benefited from the enhanced displays and facilities, all of which help to promote understanding of what it was I was observing, and drawing attention to important things that I could easily have missed or dismissed as of little relevance.

My assessment of the event was that it was very successful. There was considerable interchange and communication between the groups. Old friendships were renewed and new ones formed. The Federations have a number of other joint events in planning at present and details of these will emerge in the weeks and months ahead. The next opportunity to meet again will be at the Ulster Local History Trust’s November Conference in Monaghan Town on the theme Across the Narrow Sea: Plantations in Ulster.

Some photographs of the event are provided below. [For more photos click HERE]