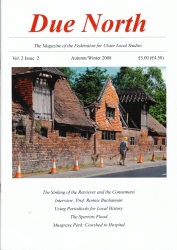 The Federation’s journal was relaunched on the evening of 4 September in PRONI attended by members of a a number of Societies from Belfast and other parts of the Province, some from as far away as Londonderry. Johnny Dooher, FULS Chairman, welcomed everyone to the event and thanked Roddy Hegarty, Editor, for the sterling work he had done in resuming the series, which had been in danger of being lost as a result of last year’s financial problems. He also thanked PRONI for hosting the event and for all their help and support over the last few difficult years.

Trevor Parkhill of the Ulster Museum and Editor of Familia, the journal of the Ulster Historical Foundation, in formally launching the new edition, commented on the symbolism, as a former employee of the Federation and his current work on local studies including talks to local groups, of being asked to relaunch the journal and how glad he was to see it’s rebirth.

Roddy Hegarty thanked everyone who had helped in the enterprise and described some of the difficulties encountered. In the end he considered that this was a rounded edition, touching on a number of significant areas. He was pleased that the journal would be able to provide a forum for publishing local studies.

Click here or on Cover image for Contents page

These images catch something of the flavour of the event.