AGM of the Federation of Local History Societies, Kilcullen 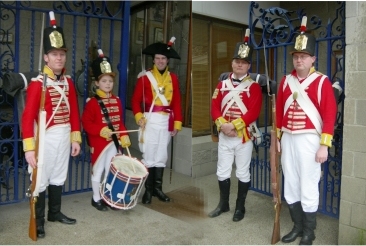 Three members of the Federation Executive Committee, Finny O’Sullivan, John Hulme and Pat Devlin, attended the AGM of the Federation of Local History Societies in Kilcullen, Co. Kildare on Saturday 29 March 2008. The visit was a follow-up to the successful meeting in Drogheda on 13 February to re-establish links between the Federations.

Over 70 delegates attended in the splendid new Heritage Centre and were greeted by a group from the Monasterevin History Society decked out in the uniforms of the Napoleonic Wars.

Mary McGleenon, Mayor of Naas, opened the proceedings. Ger McCarthy, Chairman of the Co. Kilkenny Federation of Local History Groups gave an illustrated presentation on the Euston family of Co Kildare from the 14th Century that was wide-ranging and scholarly. 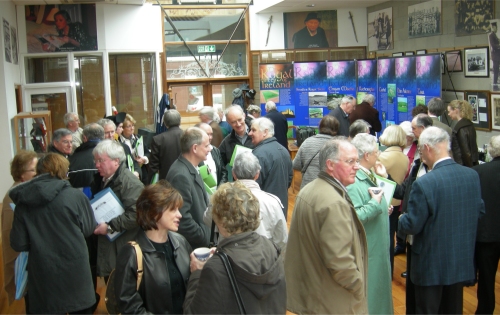 Chairman Larry Breen provided a run-down of the activities of the Federation over the past year and outlined the programme for the incoming year, including a planned trip to Rome, following up the theme of the Flight of the Earls, the development of the County Federation idea and workshops on a number of topics, including one on the theme of encouraging young people to become involved in local history issues. Treasurer Dermot Ryan, himself a teacher, had a number of ideas as to how this might be developed. Larry also reported on the meeting of the Federations in Drogheda and of the developing links planned.

There was an animated debate on the Federation’s Insurance scheme, which is differently organised that of the Ulster Federation and it was agreed that the Federations should compare terms, conditions and costs. 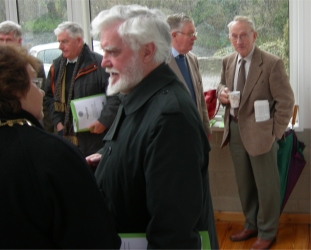 An interesting feature of the AGM, and one we might usefully adopt in the Ulster Federation, was a session called “Society Spake”, where delegates gave a brief summary of their Societies’ activities, in particular on any unusual or innovative initiatives.

Overall, it was a very successful event; we met many interesting people and exchanged views and experiences and I am sure the links between us will grow and develop over time.